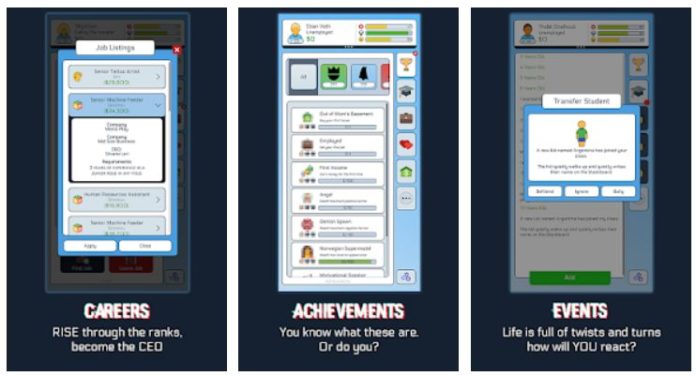 Another Life is a brand new mobile game that follows in the footsteps of the popular Bitlife, meaning that it allows us to live a virtual life, complete all sorts of achievements during this time and have fun like never before.

Coming with a ton of options from the get-go and even more things that you can do in the game itself, but also with a really high difficulty rating (depending on what you want to achieve), this is a game that could use a complete guide. And that’s what we’re going to offer you with these Another Life tips and tricks.

So, no matter what you want to do in the game, from unlocking achievements to anything else, you’ll have a much easier time after reading our Another Life – Life Simulator guide below!

Perform as many things as possible each year

There is no limit on how many actions you can perform each year, although many of them can only be performed once.

It’s a good idea to perform as many as possible each year if you want to max out your stats, keep your relationships under control and get the most out of the game or complete achievements.

It’s actually possible to get most of the achievements currently in the game in a single run, but it’s up for you to decide how you want to play the game and live your virtual life. But you get more from doing more!

Focus on maxing out your abilities one at a time

Unless you want to roleplay a certain type of character, you should focus on maxing out your abilities, which is fortunately easier than it is in Bitlife, and even if you are dealt with a poor character, you still have chances to max out everything.

For example, one of the characters that I played – the one that I will use as an example in this Another Life guide here, started with a really low appearance rating – which I eventually managed to max out after turning 60.

So with a bit of work and planning (and a lot of money spent), you can easily max out your stats. Here is how:

Health: Go to the Gym each year (costs $2,000 per year) and also train for Martial Arts ($20,000 per year – find it in the Education tab). Going to the Clown School also has a chance to sometimes reward you with some Health.

Happiness: This is usually affected by the things you do in the game and it’s usually based on random events. You lose happiness though if you study harder. You can gain happiness if you go clubbing, host a party at home, go on a date and so on.

Appearance: You can improve this by having plastic surgery. The more expensive, the higher the increase.

Intelligence: This can be increased by studying harder (which reduces happiness) or choosing the Tutoring Extra Class from the Education menu ($20,000 per year). Also the Clown School can increase your Intelligence.

Charisma: Increases with the Speech Class ($20,000 per year) or Clown School (random effect each year).

All or most of these stats can be affected by your in-game actions, so always spend a moment trying to anticipate the results. While in some cases results of your actions are obvious, in most they are not.

Also, since it costs a lot to increase these stats – and it also takes time – start doing things one at a time. Going to the Gym should be your main priority since it’s the cheapest of them all and health fluctuates a lot.

Then, focus on one skill at a time, starting with the one that’s closest to maxing out and moving down from there on.

Unless you want to play the dumb and dumber game or anything like that, it’s always a good idea to study hard early on as you will have a greater chance of being accepted to the Specialization you want and land better paying jobs.

However, once you complete College and are satisfied with your Intelligence and starting job, stop studying harder, as this will drop your mood.

Get a job ASAP

As soon as you can, get a job! There’s rarely a penalty from working (except for when you are not taking the interview) and the benefits of having money are huge.

Try to find your first job (part time) in the field that you want to keep working in, as some more advanced jobs will require previous working experience. In other words, if you want to become an actor, don’t start working in Engineering jobs.

Also, don’t forget to ask for a promotion every now and then – and if it’s not possible to get a better paying job, leave for a better opportunity.

What is the Purple P icon near a job?

Those icons mark Part Time jobs. These are the only jobs that you can have while studying, and you can’t get promoted when working a part time job.

So as soon as you finish your studies (or as soon as it is available), switch to a full time job!

Play to unlock the achievements

In order to unlock everything in the game, you should first unlock the achievements. Not only that you get the satisfaction of doing everything right in the game, but this is how you will unlock new and exciting play modes in the game: CEO and Hero. (I have a full guide on playing CEO in the game, make sure to check it out!)

These are two special paths that you can follow, with the first one allowing you to try to become the richest person in the world (and manage successful companies), while the second one lets you become a vigilante, battle villains and save people in need.

You have multiple extra options in the lower menu

The button with three dots on it holds a lot of secrets (at least if you are like me and only push it after the first two lives!).

You have a ton of useful options there, from actually activating the toggle to go to the gym, to many other in-game options like traveling, going clubbing and so on.

In other words, make sure to check everything out after turning 18: press all buttons to make sure that you know of all the options available in the game.

It’s easy to be filthy rich!

Unlike other life simulation games, Another Life makes it very easy for you to become insanely rich. All you have to do is to unlock (or start with) the CEO option.

This might take some time, depending on where you are in life at the moment, but it all resumes to collecting dividends from the companies that you own.

Once you are the CEO of a company, simply start investing all your money in it, then each year collect dividends. If the board has full faith in you (achievable by releasing successful products), you get a ton of money.

Invest them to make more money, launch new companies and do the same. Even more, you can play as one of your children when your life is over and they can take over your fortunes and one of the companies.

Doing this over and over again will make you richer than anything possible.

Go to the movies for boosts

If you’re low on happiness or health, you can watch an ad for a random boost. You can access this option from the bottom menu button, under the “Watch Movie” option. Usually, after doing this, you will receive some random boosts, usually a happiness boost and a slight increase in one of your other stats.

Live the life that you want!

Being a game with so many options and potential paths for you, the best approach is to just have fun and play as you feel like playing: you can be a hero one life, a successful CEO the next time, an uneducated housewife with 10 kids the next and so on or a freak who has 25 rocks as pets… your choice is yours!

Most fun in Another Life – like in all similar games – comes from the randomness of everything and the plethora of choices that you have available. So take advantage of this and have the fun of your life!

These would be our Another Life – Life Simulator tips and tricks for now. More articles are coming soon, to help you with the more advanced features of the game, so make sure to check back soon if you need extra help!