Home Game Guides Another Life – Life Simulator CEO Guide: How to Unlock & How... 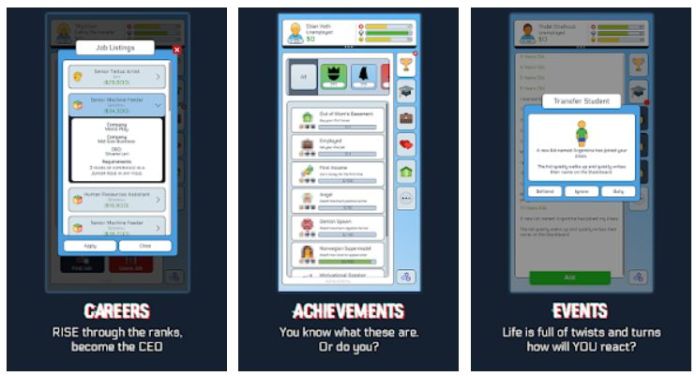 In Another Life – Life Simulator, things get a lot more exciting if you choose to become a CEO: you can become the richest man in the world, run your own companies and launch tons of successful products.

And even though this is the easiest of the additional gameplay mechanics in Another Life, I still decided to share a guide on being a great CEO in-game in order to help you reach a fortune, complete all achievements and become the richest man on earth.

It will be very easy, you will see: and it becomes easier with each new life that you play, if you choose to play as one of your children.

How to unlock CEO in Another Life – Life Simulator

In order to become a CEO and permanently unlock this career path, you must ask for a promotion when in an EVP position in a company.

This could work with any job out there, but in order to make it a lot easier for you to unlock becoming a CEO, you should do these two easy things:

Eventually, you will get there – if I remember correctly, I reached the EVP position around the age of 50, but it was still enough to unlock all the CEO achievements.

Once you unlock this career path (and select to play it), your regular job interface changes to the CEO interface: from here, you will be able to control your companies, collect dividends, launch new products or companies and perform your CEO duties.

You can be as involved as you want – from minimal to no involvement, but if you want to become the richest man on earth and complete all the achievements related to this game mode, you will have to focus on it a lot.

But it’s easy and fun and once you get the hang of things, you will build an incredible wealth, like never before.

Here are the steps that you need to take in order to make out the most out of the CEO mechanic in the game:

1. First of all, focus on the achievements, one at a time.

The easiest to get are Motivational speaker (you need a Charisma of 100, which is easily attainable, as I already shared in our Another Life – Life Simulator guide).

The second easiest achievement here is launching 30 products. Although time consuming, the launches don’t have to be successful – although the guarantee of success is mostly random, so you have little control here. Just launch products, one after another, to get this achievement.

The last two – Creating new companies and becoming the richest man on earth will follow with time and we’ll talk more about this later on.

2. When playing a CEO, there are 2 things that are mandatory each year:

The reach of the company is very important: the higher the number of staff, the more customers you will have. In order to make the nice bucks, you need as many customers as possible.

3. Launching products that are successful

While the success rate of a product seems to be a bit random, there are some things that you should take into account when launching a new product if you want to increase the chances of it becoming a successful launch.

The first and most important thing that you have to consider is the number of customers: if you have 10,000 fans and you launch a products with 50,000 units, you will most likely get an unsuccessful launch as you simply don’t have enough customers to sell it to.

What I did to get a nearly 100% successful launches was this: I always launched a product with around 1,000 fewer units than we had customers. This seems to be the most important factor of them all – not the name of the product, the country and not even the price.

I didn’t really spend a lot of time testing pricing of the items launched – I usually only launched cheaper stuff (under $50 most of the times), but I had a few launches with much higher prices just to see how they do and as long as I launched fewer units than fans, things turned out OK.

4. Becoming the richest person on earth

After you’re done with your previous achievements (or even while working on achieving them), you can focus on topping the world’s rich list: and it’s a lot easier than it seems!

Doing it is a matter of collecting dividends – and having as many companies as possible, with as much cash as possible, in order to collect more.

You will make the board happy especially by launching new successful products and from donating personal money to the company. Once you reach 5 stars, there’s no real need to launch new products unless you want to work on your achievements or for roleplaying.

The trick to become filthy rich in the game, once you have 5 stars of trust (you can do this even before this moment) is this:

First, collect the dividends from the company or companies that you own.

Next, launch as many companies as you can, even if you only use the minimum required amount. I recommend launching at least 5 companies – this is enough for you to reach the #1 spot on the richest list.

Then, invest all your money (make sure you keep enough for personal expenses though!) into the companies: invest equal amounts in each company.

Next year, collect dividends. Run HR campaign. Invest all your money equally among your companies. Do the same the next year, then the next and so on.

Eventually, you will earn yearly dividends of hundreds of millions of dollars from each company. Once you reach these amounts, simply hoard up the money in your personal account until you reach the top richest list.

If there’s an unfortunate event during your in-game life that prevents you from reaching your goal, play as a child as you will get the chance to start as a CEO from scratch, managing one of the existing companies.

This means that you will start with a massive boost of money that can be used to grind until you become the richest person on earth. It’s really easy, actually… and pretty fun I would say!

And this would be it – you know now everything about the CEO part in Another Life. We’ll soon have more details about the other exciting (even more exciting than being a CEO, too!): Hero or Villain.

Another Life – Life Simulator CEO Guide: How to Unlock & How to Win