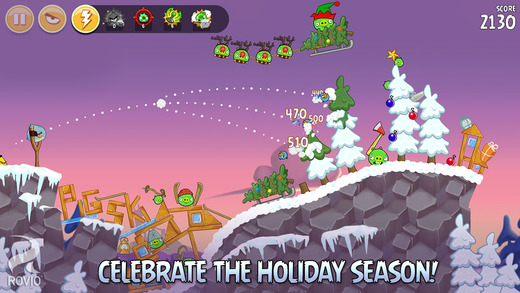 Angry Birds Seasons, one of the games of the Rovio series now available on the App Store, has received a new update.

The new update is called the “On Finn Ice” which features,as the name suggests, some new stages with snowy landscapes and a Christmas theme. The update includes a total 25 new stages, one for each day until Christmas.

Angry Birds Seasons has received another update around two months ago. This update, called Ham Dunk, included 15 new levels as well as a new power called the Shockwave, which can be used to clear stages as a last resort. Other stages based on the NBA teams are also available through the purchase of the NBA Season Pass.

Angry Birds Seasons is now available for purchase on the App Store for only $0.99. The new Christmas update is also available for download for free on both iPhone and iPad.