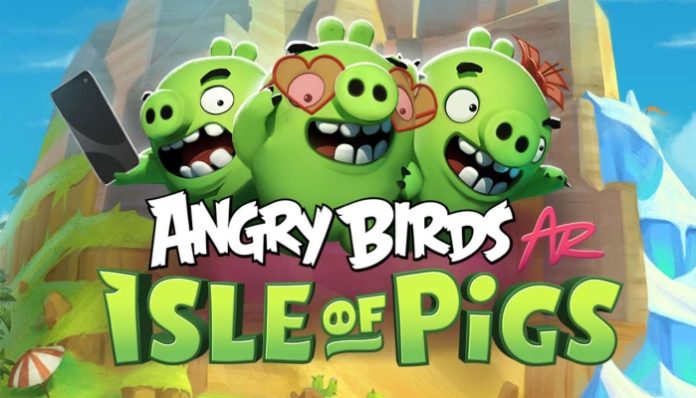 Welcome back to the Isle of Pigs! There are plenty of pigs to take out and buildings to destroy, so let us walk you through the individual levels in our Angry Birds AR: Isle of Pigs walkthrough! Today we will go over the very first world in the game, Picnic Point. We will cover all thirteen levels, so grab your birds and get ready to fly!

This walkthrough will cover the most optimal strategies for taking down the pigs and structures, so you should have no problem getting all three stars on each level. Let’s get started with Picnic Point!

This level is appropriate named Squealy Easy, as all you need to do is knock out any of the three supports at the bottom of the tower to take out the single pig. It is a nice and easy start into the Isle of Pigs!

Here is where the game teaches you that changing your perspective can help out. This massive complex has TNT crates on the left side and in the middle. But, if you peek underneath the deck on the right side, you will notice two small TNT boxes tucked away. Aim for those first, then with some luck the other two structures will fall over and the TNT crates will explode on their own.

Before you lies a tall tower. Do not try to aim for the supports, as they are reinforced with multiple parts. Instead, take a look around the backside of the tower – you should see one of those blue boxes jutting out a bit. Taking this box out will cause the rest of the tower to collapse in on itself!

The three huts are being held up by a center platform, which thankfully has only a thin support beam holding it up. Taking out that support will make all of the huts collapse!

This level has you causing a knock-over chain reaction. You will see three towers lined up in front of you, which descending heights. Look at the tallest tower and take out the bottom furthest support. If you do it right, it will fall into the middle tower knocking it over, which in turn causes it to fall over the smallest tower!

Your goal here is to knock out two supports of either towers. You will notice that there are vents in between the towers, so objects that pass over them will get blown around a bit. If you can take out two supports in the direction of the other tower, it will fall over the vents and into the next tower.

These two skinny structures are being supported by long thin beams. If you take a look around the base of the left tower, you will notice a TNT crate near the bottom supports. Explode the crate, and the rest of the tower should come down on its own.

This level has the same idea: there are multiple small towers being held up by thin beams. There are TNT crates hanging around the bottom of the towers, so simply take out any of them!

This one has a slightly awkward tower design, but do not fear: you just need to aim for those thin support beams again. If you want, you can try to have the tower fall into the stationary TNT crate on the small support beam, but this is a bit tricky. You can instead just opt to take out the tower the regular way.

A multi-layered tower lies before you, and with each bottom platform lies a TNT crate. You will need to take out the front towers, then look for the TNT crate in between the two back towers in the middle.

In the mini tower on the left, take a peek inside that little hole and you will find a hidden TNT crate. Explode that, and the rest of the structure should come down on its own.

This complex features multiple platforms, and there are TNT crates at the bottom. The TNT explosions should be able to bring down most of the complex, but there is a chance that one of the pigs will get stuck on the vent in the middle. Save one of your pigs to snipe him out of the air!

Take out one of the platforms that are hanging in the air. When you do so, the balloons holding them up should fly out of control, causing the boxes on the platforms to fly everywhere. With some luck, the boss pig in the middle will take enough hits from the crates to go down.

That’s all for Picnic Point! You should be able to get through all of the levels now. Next time, we will continue with world 2: Rocky Ruins! Until then, if you have any other strategies for the levels, let us know in the comments below!