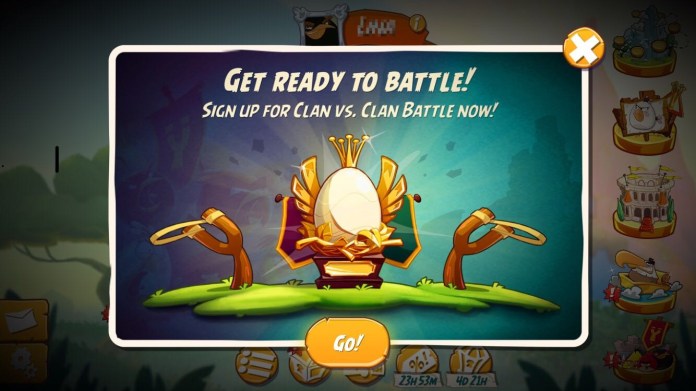 Angry Birds is one of the most popular and well-known franchises you can play on your mobile device. There you will need to use a giant slingshot to launch angry birds at your targets. You will need to destroy different structures and defeat a huge amount of opponents with your birds. All of the flying buddies you can use have different abilities and you can correct your strategy according to the birds you have. Angry Birds 2 provides players with different multiplayer activities. This guide will tell you about Clan Battles in Angry Birds 2.

Clan Battles in Angry Birds 2 are battles between clans. It is a multiplayer activity and you will need to do your best to defeat your opponents. During the Clan Battle mode, all the participants are able to play the same level and score points there. The more points you score the higher you will climb up in the leader’s board. After the end of the battle, you will receive a certain amount of Golden Eggs. This amount will be based on the place you’ve earned on the leaderboard. The clan with the highest amount of Golden Eggs will win the battle.

RELATED: How to Get Feathers Free in Angry Birds 2

Clan Battles are difficult and you should prepare yourself if you want to participate in such a battle. However, before you will be able to play it you will need to join it.

How to Join Clan Battles in Angry Birds 2

In order to join a Clan Battle in Angry Birds 2, you need to be a member of any clan. Then you should wait till your clan will challenge another clan. After that, you will be able to sign in to the current Clan Battle and participate in it. Do your best and don’t let down your teammates as they rely on you.