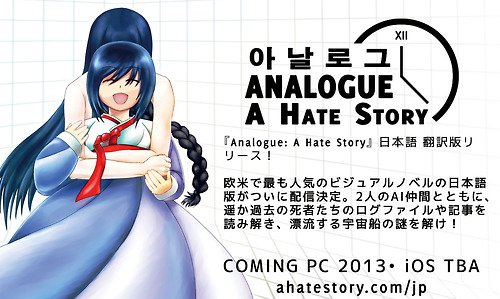 Indie developer Christine Love has announced via her blog that a portable version of her popular sci-fi visual novel Analogue: A Hate Story will be coming to iOS devices later this year ahead of its Japanese PC release.

According to Love’s announcement, she has partnered with fellow indie developers Golden Gear Games to bring Analogue to iOS devices and she’s “really friggin’ excited” to be getting to share her creation with iOS gamers all over. The iOS port isn’t quite ready yet as it needs “a little bit of reworking” as Love likes to call it in order to get the game to integrate properly with an iOS format. No specific release date is set at this time but Love has confirmed that it will be out before the year’s end.

In addition to iOS, Analogue will also be coming to PC in Japan (with a Japanese iOS version soon after) and will feature a translated script courtesy of Playism (whom some might recognize as the folks behind the remade indie PC platformer La-Mulana). Love also confirmed that a fully playable demo of the PC version will be up and running at this year’s Tokyo Game Show which is set to kick off this weekend.

Again, no specific release date has been confirmed for the Japanese PC version of Analogue but, like the North American iOS version, it should be out before the end of the year.

Analogue: A Hate Story Coming To iOS Devices Ahead of Japanese PC Release