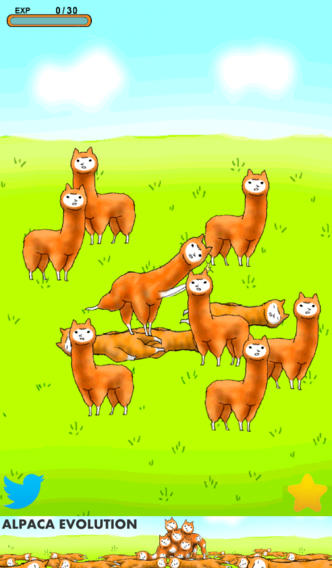 Alpaca Evolution is yet another really simple mobile game that has managed to become a huge hit thanks to its simplicity.

In Alpaca Evolution you will take the role of a magical Alpaca, who has the ability to absorb all the other Alpacas around it in order to obtain experience and evolve in one of the many magnificient forms available in the game.

Alpaca Evolution is a really addictive game that doesn’t require much time to be played and enjoyed. At the same time one might be impatient and may want to see their Alpaca evolve as soon as possible. If that it the case, you have come to the right place, as we will be covering how to make alpacas appear more quickly and more with our Alpaca Evolution tips and tricks!

As you might have noticed by playing the game for a few minutes, alpacas in Alpaca Evolution take some time before reappearing again to get absorbed. It takes around 30 seconds for a single alpaca to appear again, with a maximum of ten available on screen at the same time. If you’re in a hurry, there’s a simple way to make them appear again as quickly as possible. Simply move your device’s time five minutes ahead and you will see 10 lovely alpacas on screen again.

You must be careful in doing this properly, as there’s a chance the game will make you wait for the time you skipped with the next Alpacas. To avoid this, make sure to absorb the Alpacas after you have set the time back to the real one.

Alpaca Evolution is almost completely in Japanese, but this must not turn you off in any way, as the only menu that matters in the game is the one that allows you to check your current level and progress. So play away without worrying about anything else.

If you’re one of those gamers who cannot stand ads in their games, there’s a simple trick that will allow you to remove them from Alpaca Evolution. Simply play the game in airplane mode or with your data connection turned off and they will not appear at any time during the game.