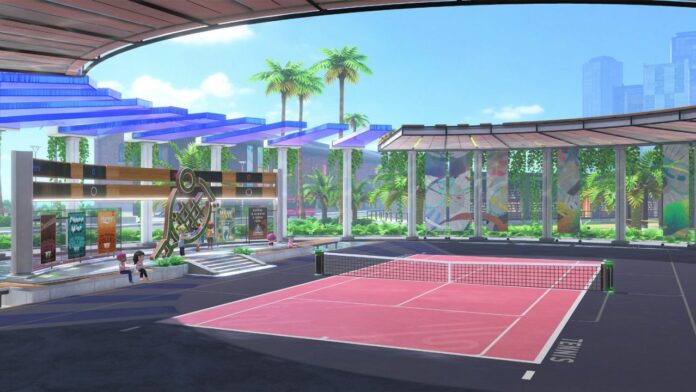 Among the sports featured in Nintendo Switch Sports at launch is Tennis, which makes its return to the series following its appearance in the original Wii Sports.

Quite some time has passed since the sport’s debut in the series and, as such, things have been changed a bit, with some new elements, like three different tennis courts, making the experience a little deeper and definitely more engaging.

Here are the differences between the three tennis courts available in Nintendo Switch Sports tennis.

Tennis in Nintendo Switch Sports features three different tennis courts that come with their own unique mechanics that do influence how the ball behaves once it bounces off the ground. These three courts are Grass, Clay and Hard.

Do note that you cannot choose on which court you are going to play before starting a game of tennis, so you will need to know these differences to win games both offline and online.

Grass Court is a classic tennis court where the ground is grass. As such, the ball will bounce lower, so you won’t have much time to hit it back to the opponent’s side after it has bounced. As such, topspins work great, as they make the ball bounce less than usual, making life more difficult for your opponents.

Clay Court is a very peculiar tennis court as its clay ground makes the ball bounce higher and slower, which makes it easy for all players to hit it back to the opponent’s side after it has bounced on the ground. Since rallies are so easy to maintain on this court, you will need to conserve your stamina as much as possible and attempt to throw your opponent off during them by going for lobs and weak shots when they least expect it.

Hard Court is the third and final court available in Nintendo Switch Sports. With its hard surface, the Hard Court makes the ball bounce high without slowing down, allowing players to employ a variety of techniques. As such, when playing on this court, every technique like lobs, weak shots, and topspins can be more or less effective, depending on the situation.