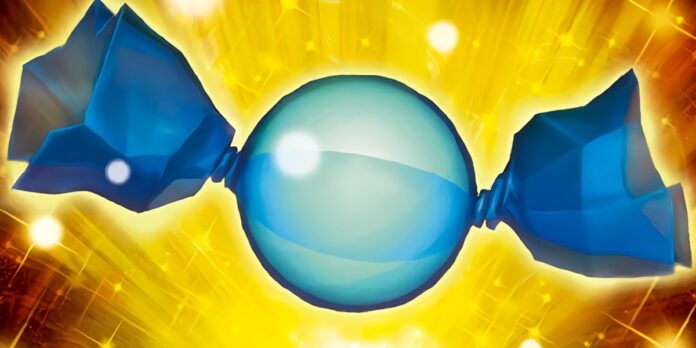 Rare Candies have been a classic item throughout the Pokémon franchise and trainers can find quite a few of them scattered throughout Pokémon Brilliant Diamond and Shining Pearl.

Feeding a Pokémon a Rare Candy not only instantly raises its level by 1, but also slightly increases their friendship. Rare Candies are massive speed-ups for players wanting to shorten their leveling process.

Also, if the Pokémon had reached evolution conditions when it leveled up, it will evolve upon feeding the Rare Candy. This can be done when the Pokémon is level 100 as well—although they won’t gain any more levels, they can still evolve.

Surf across the pond just to the right of the Route’s northern entrance, just below Veilstone City.

North of the Route 218 entrance to Jubilife City, surf to get to the small patch of grass behind the trees.

Surf east of the maze of trees just north of the Route 224 entrance, beside a cliff next to the berry patch.

Beyond the Route 225 entrance, there are two trees that can be cut. The Rare Candy is beneath the bridge to the right.

Surf to the large island in the middle of the river and smash the rock on the east side.

Dawn’s father gives all players a Rare Candy after asking how many Pokémon they have added to their PokéDex.

Under the northernmost end of the bike route on 206, there is a cave entrance that will require Flash to navigate. The Rare Candy is in the north-western corner of the cave.

Final room at the bottom part of the Solaceon Ruins. The way to get there is to take the following staircases, in order upon entering:

Upon following these sets of stairs, players will reach the bottom of the ruins.

North of the Mt. Coronet entrance, past Route 211, move the boulder with Strength and smash the following two rocks with Rock Smash to reach it.

South-eastern corner of the cave with three large bodies of water. Surf on the southern water body and go up the stairs on the west.

From the entrance of Stark Mountain’s main chamber, the path leads to a small staircase. Go to the very end of the narrow path that staircase leads to.

There are two rare candies in the Grand Underground:

Not all Rare Candies are hidden in plain sight, some of them just can’t be normally seen. Well, how does one find them? The Dowsing Machine app on the Pokétch makes things a lot easier, using its radar. Hidden items, including Rare Candies, will ping with a small dot that shows the direction where the item is with regards to the players’ current location.

Here are the locations of all the hidden Rare Candies:

Past the bike hill, on a narrow path leading south beside a hill, just west of the Hiker in the area.

Near the treeline in the northwest corner of the swamp area, north of the Route 212 sign west of Pastoria City.

Below the house with a blue roof in the middle of Route 225, above the patch of tall grass.

Up the stairs, past the room with the beds and down the hall, there are three warp pads. Take the warp pad in the middle and it will lead the player to a room with two cargo crates in the bottom left corner with the Rare Candy.

North-western corner of Area 1 in the Great Marsh.

South of the Seven Stars Restaurant in the Grand Lake Hotel area of the Valor Lakefront on Route 214, past the three small cliffs that can be scaled with Rock Climb, hidden on the top cliff.

From the Celestic Town entrance to Route 211, there’s a staircase leading down in the passage to the north that descends into a foggy room that must be cleared with Defog. Following that path the whole way north will lead to two small boulders behind a smashable rock, and the Rare Candy is hidden between them.

There are two Rare Candies that can be found hidden on Victory Road:

In addition to these locations, Rare Candies can also be obtained from:

Rare candies are a rare and valuable resource throughout the history of the Pokémon games and players need to make sure to use them wisely, with the very finite nature of their existence in Pokémon Brilliant Diamond and Shining Pearl.