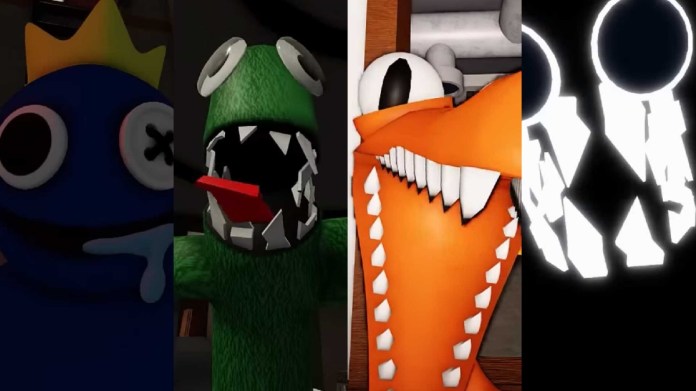 Every Monster in Roblox Rainbow Friends

Blue is the monster you will see on the game’s loading screen art, and is the first you will come across. He is a big button-eyed, drooling monster who moves quickly so listen out for his footsteps! His footsteps sound like normal footsteps you or I may have but he is certainly not normal. He is tricky to avoid and can detect you even when he is not looking at you, so try not to get rushed into a corner or you may not come out alive. Don’t use your box too late or he will focus on you and catch you up!

The second monster you will see is the green monster. He is not too hard to avoid as he is blind. This means he cannot see you when you are near him. The way he will trick you and capture you is by blocking things you may need, such as exits or items you want. You can also hear him coming by his squeaky footsteps!

Orange is a lizard type monster who lives in a cave. He is the third of the monsters you will encounter during Roblox Rainbow Friends. He has pretty loud footsteps and creates an orange trail that he follows along- so if you see a path of orange and hear his footsteps you had better run or hide! Don’t touch the orange path, or even get near it, as he will sense it and get you. Hide in your box near (but not on!) the path and he will speed by. The only way to keep him distracted is by feeding him in his cave by pulling the red lever.

Related: How to Get the Eating Glue Face in Roblox

Purple is the last monster in this game and is not too hard to avoid. The way to spot him is to look in the vents. He leaves a puddle of water under a vent when he has been in it, but if you see a puddle and he is not in the vent then it is safe to walk over the puddle. If he is in the vent do not walk over the puddle! If you do he will grab you and pull you in. Getting in your box will not help you avoid purple monster at all.

That is everything we know about the 4 monsters currently in Roblox Rainbow Friends right now! We hope this guide has helped you survive as you play. Next, why not find out how to get the OOF sound back in Roblox?

Good luck and thank you for reading!