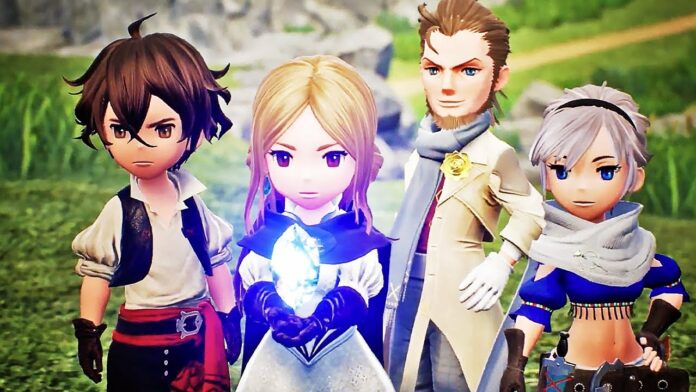 While the Prologue can be considered as the real first story chapter of the game, it’s only in Chapter 1 that things start getting serious in Bravely Default II. With only the most basic Jobs being available at this point, defeating the Asterisk Holders in this chapter can be a bit of a challenge.

If you’re looking for some useful strategies on how to defeat the Asterisk Holders encountered in Chapter 1, then you have definitely adventured to the right place. Here’s how to defeat these powerful bosses with ease.

How To Defeat Orpheus

Orpheus is the first proper Asterisk Holder battle in Bravely Default II, and it’s far from being particularly difficult. Being a Bard, Orpheus will focus on supporting his party of monsters. Before taking down Orpheus, focus on defeating the monsters first: use Thunder and Bows for Diatryma and Water and Spears for Toxolotl. Do not target Orpheus as well, as he will counter all magic spells when they target multiple enemies.

Once the monsters have been defeated, you can go all out on Orpheus. Use Spears and Bows to deal damage, and heal when needed. His attacks do not deal a whole lot of damage, so you shouldn’t have too many troubles keeping your health points up.

By defeating Orpheus, you will unlock the Bard Job.

Anahil fights together with her monsters, but it’s not a particularly difficult battle if you prepare properly beforehand. As Anahil often tries to Silence your party, the best way to deal damage to her and her monsters is with physical attacks. Monks work particularly well in this fight, coupled with at least one character that focuses on healing. She is also weak to Earth and Swords, so keep this in mind when preparing your party.

By defeating Anahil, you will unlock the Beastmaster Job.

How To Defeat Bernard

The battle against Bernard is not particularly difficult if you focus on healing first and foremost. In the battle, you will also have to deal with his companions, so focus on defeating them first to reduce damage received as much as possible. Keep in mind that Bernard will use his stealing abilities often, so do not lower your guard even when you’re close to victory, as he can steal HP and prolong the fight.

By defeating Bernard, you will unlock the Thief Job.

How To Defeat Prince Castor

Prince Castor is the final Asterisk Holder you will meet in Chapter I, and it shows, as it is the most difficult to take down. In case you are hit too hard during the battle, you may want to grind and level up before trying again.

What makes Prince Castor quite difficult is the Berserk buff, which increases his attack power a lot. As such, you want to debuff him as soon as he activates the buff with the Freelancer Purge skill. Also, make sure to use the Bard’s buffs to increase physical resistance and receive less damage, in case you cannot Purge the Berserk buff right away.

As for damaging Castor, you can deal considerable damage with Water attacks, but you should be on the lookout for his counterattacks, especially if you haven’t buffed your defense. Using the Monk’s abilities or poisoning Castor are great ways to get in some damage as well.

By defeating Castor, you will unlock the Berserker Job.