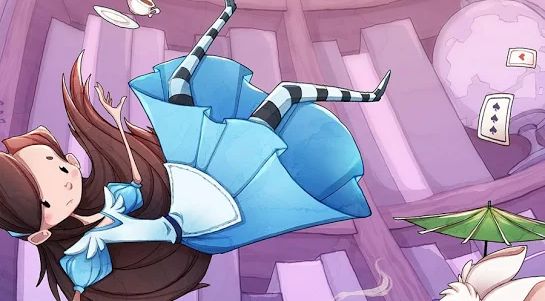 The colorful and whimsical world of Wonderland was a core part of a lot of people’s childhoods, and we were definitely one of them. Wonderland is inviting us to take part in its dreamful bliss once again, but this time things are a little different…

Alice Legends is a bright and charming re-imagining of the timeless classic. Alice once against finds herself lost within Wonderland, and she must battle against the Queen of Hearts to find her way home.

Battle in Alice Legends are not what you think! To fight against the Queen of Hearts’ minions, Alice must call upon the power of… Rummy cards? Battles in Alice Legends play out like the classic card game Rummy.

Alice will battle alongside her friends like the White Rabbit as she matches cards to dish out damage to the feral monsters of Wonderland. Fragments of Wonderland are missing, and it is up to Alice to recover the magic pages held by the monsters. Rebuild Wonderland as you see fit with multiple options to choose from!

A beautiful reimagining of Wonderland awaits! Alice Legends is available now as a free download on the App Store and Google Play Store.