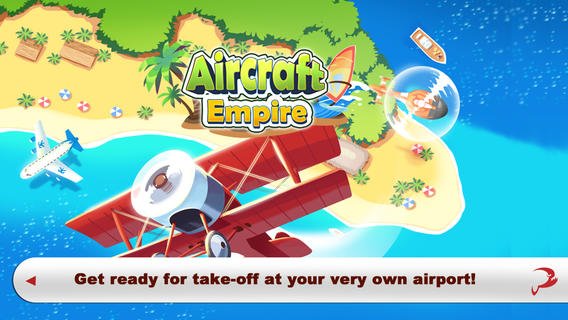 Aircraft Empire is an extremely well done game that is not only about sending regular planes to friends, as it might look like at first, but once you reach level 10, the real fun begins.We’re not here to talk about how great thins game actually is, but instead we’re here to talk strategy and share with you some Aircraft Empire cheats and tips in a hopefully complete strategy guide that will help you get the most out of this game!

Basically, the game is divided into two different games: the Aircraft Empire where you build your regular planes and send them on routes to friends to get more coins, and the Aircraft Empire that takes place on the SkyMaster Battlefield, where you create fighter planes to challenge other players and compete in single player missions. So we’re dividing this strategy guide in two pieces.

Aircraft Empire cheats and tips for the regular game

Complete the missions
The best and easiest way to progress through the game and learn all the basics is to complete all the missions. You’ll quickly go through them and you can easily reach superior levels (although not level 10) during your first playthrough.

Buy all the plane spots ASAP
Don’t wait for a mission – if you have the money, unlock the additional plane slots. The more planes you have running, the more money and XP points you will get, plus you will increase mastery levels faster. So always have all the airplane slots occupied and working as you can always change the planes that are used and the routes!

Buy a lot of fuel when it’s cheap
Fuel prices vary a lot, so make sure you check them out often. When you find a good, low price, purchase large quantities of fuel. A good price is anything under $10 per unit (or 500 per 50 pieces). Even though you don’t get a discount for purchasing larger quantities, you will need them, so if you buy them cheap, it’s all good!

Paint all your planes the same
I know that you would like to have variety and you like more paint jobs, but it really helps later on to identify your planes easier if you have them all having the same paint job. There will be times when you will want to select a specific plane type, replace one or change the route and you won’t want to go through all the routes to find the one you’re looking for.

Captain Joe is a good route for starters
Early on, you don’t need longer routes that your friends will give you, you need to send your planes as fast as possible to the closest destination in order to get that plane mastery up. Captain Joe, the default character, is a good choice for until you reach level 10. He’s close, he’s easy to reach and you should always have planes sent over to him.

Add friends based on the distance (clouds)
When you send new friend requests, consider the distance to them. It is shown above their profile icon as clouds: 1 is the shortest distance (no need to add any, since you have Captain Joe) and 5 is the maximum distance. When adding them, have in mind what planes you have as some can’t travel on longer distances. The longer the distance, the more time is required for your plane to get there, but you also get better rewards!

Don’t forget about the freebies
There are a lot of freebies being offered in Aircraft Empire: the daily reward and all the freebies at the Events tab. Make sure you get them daily or as often as possible – there are a ton of goodies to be had there!

Longer routes
As soon as you have the first expansion purchased and operational, it’s time to put those friends to good use. Get rid of the planes that can’t get too far and only purchase planes that can cover the maximum distance and send them to destinations that are as far as possible. This way, you will earn a lot more coins every few hours and you’ll be able to focus on the warring side of the game instead of having to log in every few minutes to unload the planes from Captain Joe.

Fast forward time
You need some extra money and you don’t want to wait for it to arrive? There’s a small cheat that will help: simply go to your iPhone or iPad’s settings and fast forward the time with the amount required to have the planes reach their destination. When you get back in the game, you will be able to reap on the benefits (works for the battle zone too!)

Don’t auto fight
Unless we’re talking about the single player campaign and you are 100% sure that you can easily win the battles, don’t use the auto fight option – you will surely play better!

Use the special weapons as soon as possible
As soon as the weapon is unlocked, tap to use it – any lost second might mean an extra shot coming from the enemy and might result in you losing the battle. Although highly improbable during the single player missions, this becomes extremely important during multiplayer battles!

Complete the missions
There’s a new set of missions awaiting for you to complete right here too, so make sure you play a lot following the missions: you will upgrade planes and weapons accordingly by doing so.

Upgrade constantly
The secret here is to constantly upgrade the weapons that you unlock and keep them to maximum levels. The weapons and carrier upgrades remain the same even when and if you change your planes, so it’s always good to invest in them. Also, keep your planes upgraded to the maximum because you will need them in top form during the multiplayer battles.

Replay missions
If you need extra parts, and you want to make sure that you get them easily, replay missions that you have already completed. You will still receive rewards and pieces for planes and you have the guarantee that you can beat them!

This would be everything, for now, in terms of Aircraft Empire tips and cheats