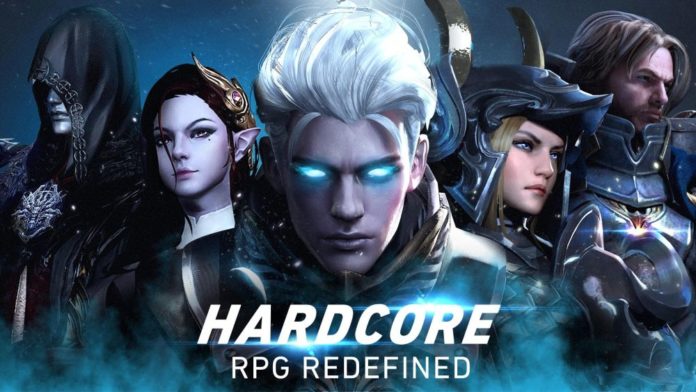 There’s a brand new hit mobile RPG here and we’re going to help you get better at it! Our Aion: Legions of War cheats and tips in this guide you’re reading right now will make sure that you’re starting the game on the right foot and playing it in such a way that you’ll get the most out of it faster than the rest. It’s going to be an epic journey for sure!

Based on the popular PC MMORPG, Aion: Legions of War offers fans of the original game (and not only) a chance to experience something different in the Aion universe. Something spectacular, too, as the game is definitely one of the best looking mobile games to date. With tens of heroes to collect and tons of challenges to complete, this is a joy for fans of the gacha style RPGs, as well as those who play(ed) the original MMO.

And we’re here to help you learn how to play the game with an epic Aion: Legions of War guide, filled with tips and tricks that make progress smoother and easier.

To autoplay or not?
As I am writing this guide, my top heroes are beating mission after mission, leveling up and getting stronger, doing everything by themselves. 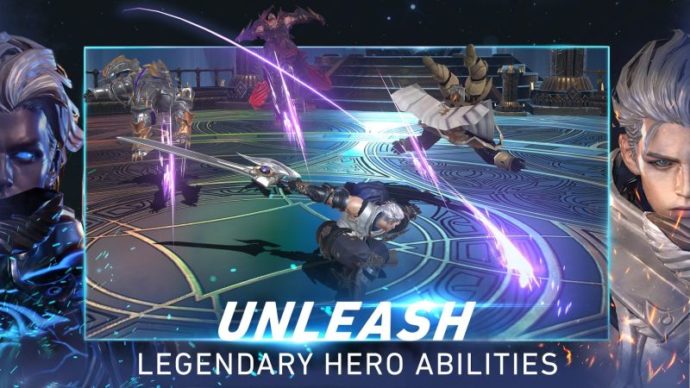 In my opinion, this is not how games should be played (I’m not even looking at what’s happening on the screen, so I can’t really say that I am playing), but the truth is that the autoplay feature comes in handy because there’s a lot of grinding involved with Aion: Legions of War.

My recommendation, therefore, is to let autoplay work its magic when you’re dealing with the extremely simple stages in the adventure mode and take over when you want to actually play the game or there’s a more difficult battle ahead. There’s not point in playing a game if you don’t do any actual playing!

The pre-battle Tactics is important
Before each battle, you can select one of the three tactics available for your heroes to follow in the battle. Each comes with its own set of boosts offered to the team and with unique perks during autoplay. These are: 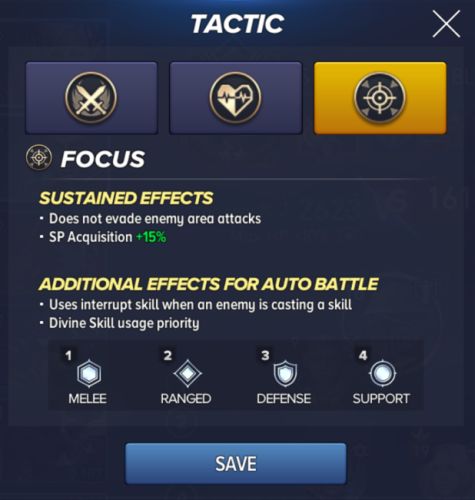 I would say that the first and last tactics are best for easy battles, the game recommending you to go with Focus since you get the 15% increase in SP acquisition. I agree with this, I rarely use anything but Focus when I play.

The nice thing about this is that you can still tap the Divine Skills during combat, even on Autoplay, without actually deactivating the autoplay feature. This way, you have a bit of extra control in battle if the AI doesn’t really do a good job (but it does in easy battles).

– summon then from the Hero Portal, using all sorts of currencies available in the game.

Getting more characters in Legions of War is more of a grinding process than anything else, but it’s fun and, on many occasions, automated, so not that difficult to achieve. It just requires some time and dedication if you don’t want to invest money to go on a shortcut. 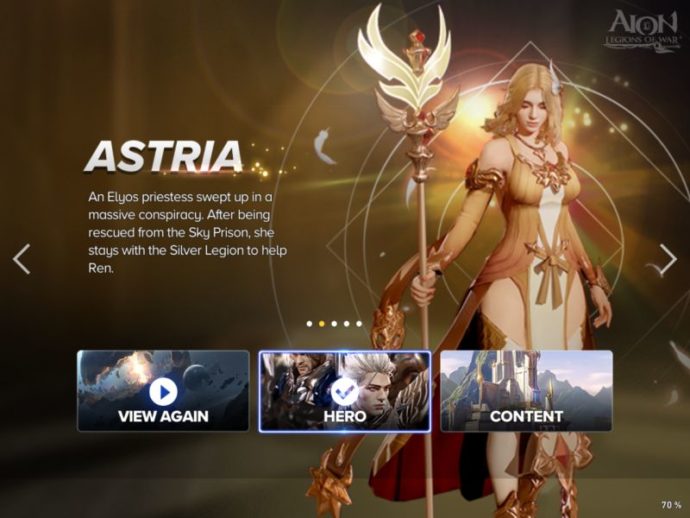 How to build the best team
Now this is a bit more difficult, because there are so many options that you have when it comes to building your squad, since you have so many heroes to unlock (and each player will have their own set in the game). However, there are some general rules of thumb that you should consider when building your perfect team:

1. Rarer heroes are better. The more stars a hero has, the higher its power, no matter the hero. The good thing here is that you can star up lower star characters (the easiest one being Ren) and make them a lot stronger and more useful in the long run.

2. Going for covering all roles is also extremely important. I think that all teams should have at least one support unit / healer, no matter what. You could then go to have one Tank, one Melee damage dealer and one Ranged damage dealer with the fifth slot for whatever hero you prefer (I recommend ranged damage dealers) in what could be described a traditional approach to team building.

However, you can get much further if you specialize your team a bit. It all depends on what heroes you have here (allow take rule #1 into consideration), but focusing on heavy damage dealing and interruptions / counters can get you far.

A nice setup that I have had great deals of success with a team that had Two Melee Fighters, Two ranged Damage dealers and 1 Healer. I tried without a healer and added another melee fighter instead, which also worked (even though with more deaths).

The key is to constantly look at what you have and try various combinations until you find the perfect one. Simply going for the traditional approach might hold you back a bit. 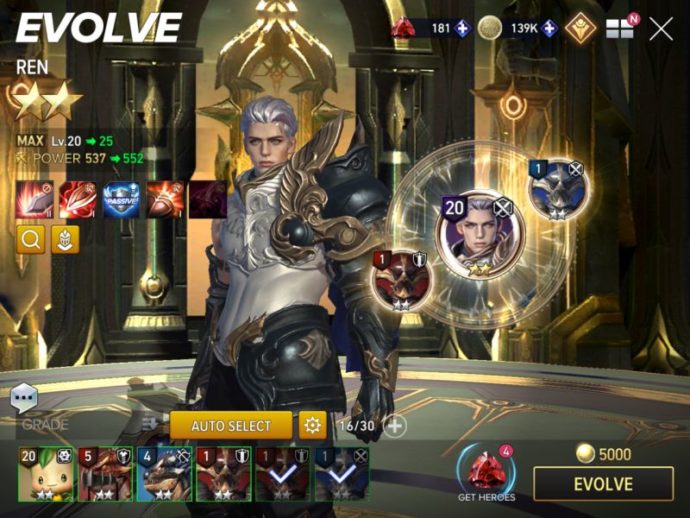 Save your resources for better heroes
There are many things you can do to improve your heroes in the Advancement Sanctum area: enhance, evolve, awaken and transcendence.

While some are simple level-ups (like Enhancing), the more advanced techniques (evolving or awakening) require a lot of resources, which are really hard to get.

Therefore, it’s better to save these resources and only use them on heroes that are of at least 3 stars. Remember, the game has 6-star heroes on offer and your goal is to build a full 6-star team in order to be really competitive, so investing your resources in lower-rated heroes is a bit of a waste.

Of course, unless you are really lucky or spend some real life money, getting that team of 6 star heroes will take a while and you’d find it difficult to progress unless you invest some of the resources in your existing heroes.

But only do it (at least when it comes to evolving or awakening) to your rarer heroes. And only evolve (star up) those that you know you’ll be using long term!

If you don’t really know where to start with all those heroes, try to focus on the ones that have a Leader skill as they are usually a lot more useful in the long term because of the boosts they give to the entire team.

When it comes to elements, there’s more of them (like water, fire, light, dark etc), and each is stronger than another. In these cases, you might do better in a battle bringing in a hero that has less power but an elemental advantage instead of one that has a bit more power but is at an elemental disadvantage.

Also, clicking the info bar next to the enemy you will be facing, you will be presented with a list of heroes that can knock back your opponent. These are extremely useful in battle because a knocked down opponent is useless for a while and easier to defeat, so do try to bring those heroes in if you have the chance.

Finally, don’t forget about interruptions: you can interrupt an oponent if you cast a skill when they’re trying to activate their skill, basically cancelling their advantage. This requires a bit of practice, but it can turn the tide of a battle!

Easy wins with the overpowered Support Heroes
A really useful trick that I found to be working right now – especially when it comes to defeating the really difficult Dungeon stages – is taking advantage of the legendary support heroes that the game offers you to try.

They are extremely powerful and can single-handedly win a difficult battle in the early dungeon stages, so only bring those to your team in these battles. Then, as soon as one of your heroes dies, tap the supporting character’s icon to bring them into the battle and enjoy the easy win.

You can also get a similar advantage if you add friends with really high level heroes – but even if you don’t, this support heroes trick will help you win a lot of very important (and otherwise impossible to beat) missions early on! 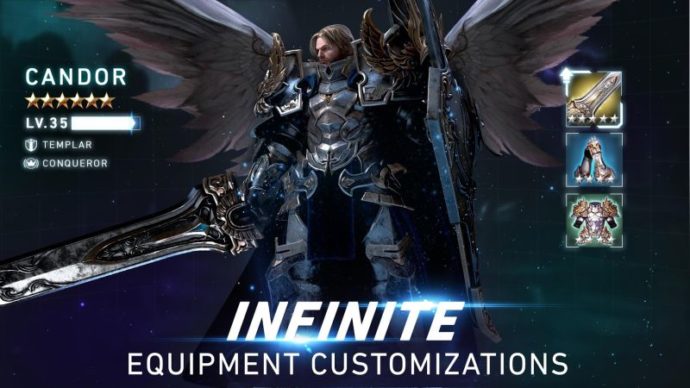 There are tons of items that you can get for your heroes in the game and equip them to boost their stats. However, there’s an important thing to consider when it comes to the gear you can use:

If you try to equip an item into a slot that’s already filled, your existing equipment will be destroyed. However, if that particular piece of equipment is important and you don’t want it destroyed (maybe you have another hero who could use it), you should Unequip it first: this will cost you some money, but you get to keep the piece of equipment.

This is extremely important to know, especially when dealing with extremely rare pieces of equipment or when working to get specific sets for specific heroes.

Save your Gems for 10 Summons
Getting gems in Aion: Legions of War, for free, is not extremely easy, but at least at first when you start playing the game, you have a ton of Gem rewards that can easily and quickly get you to the required amount of 800 gems or what is needed for the 10 Hero Summon in the game. And that is what you should do.

The reason why you want to save up for 10 Hero Summons in stead of getting them one by one is that if you choose the former, you are guaranteed a 4-star hero, and you still have 9 other chances for scoring additional 4 or 5 star ones. On the other hand, if you get the Gem Summons one by one, you are not guaranteed to get that 4-star hero. 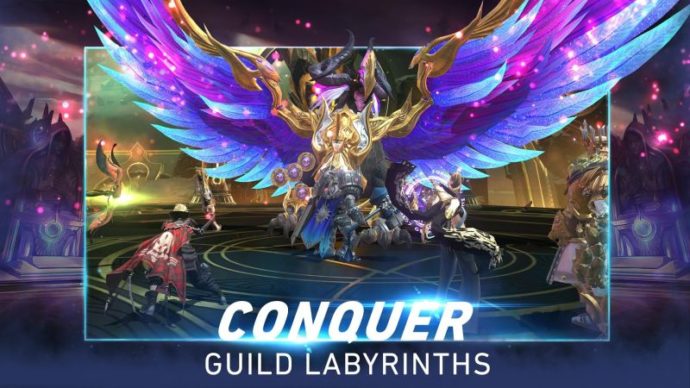 Join a guild ASAP
Being part of a guild is, just like in any similar game, extremely important and can give you some really impressive rewards. In this case, simply attacking in the Guild Dungeon will reward you with tons of XP points for your heroes and amazing rewards.

But apart from that, you have the Guild Shop, guild-related events and boosts and many other goodies that you wouldn’t get otherwise. So make sure that you join a guild – and an active one, too and your progress will be a faster and easier.

Complete the daily quests for top rewards
Finally, it’s worth noting that there are all sorts of rewards in this game, but the ones you should grind on constantly are the Daily Quests.

Completing them each day will not only reward you with important goodies (including free gems), but when you finish them all, you also receive the daily reward which consists of hero shards and even more goodies. So make sure to complete these as often as possible also!

These would be, for now, our Aion: Legions of War tips and tricks. We’re going to have a lot more articles published about this awesome game in the near future, so if you need more detailed guides related to specific in-game mechanics, check back often.

Aion: Legions of War Tips: Cheats & Guide to Learn How to Play the Game Better