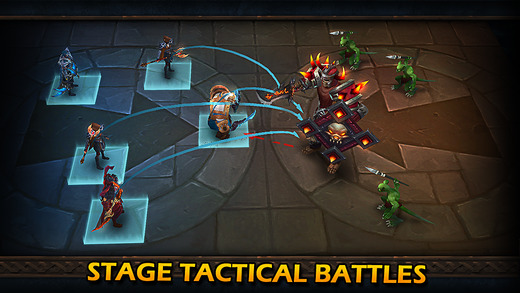 In the ancient realm of Elantra, cities and kingdoms are under siege by monstrosities known as the “abominites”.  Heroes from all around the world have gathered under one banner: for all of Elantra! Age of Warriors is a tactical squad-based RPG that puts you in charge of a group of powerfully trained heroes. Lead them to victory with strategic battle plans! We’ll help you become the best tactician of all of Elantra with our Age of Warriors cheats, tips and tricks strategy guide.

There is a lot to get through here so let’s get started with our Age of Warriors cheats, tips and tricks strategy guide.

Starting out, your team at minimum should always have a fighter, an archer, and a mage. The reason being is that each class counters another a class: fighters beat archers, archers beat mages, and mages beat fighters. When your base stats are high enough, this will start to be less important as the game goes on, but early on you should try to stick to this set up for maximum efficiency.

Before every battle, you’re given the chance to move around your heroes. This is very important to being successful, so be sure you position them wisely! For example, you’re going to want your fighter to be in the front lines. Heroes and enemies will attack the closest target to them, and you can see this by moving your heroes around. A blue line will show what your heroes are going to attack, and a red line will show what the enemies are going to attack. If you keep your fighter in the front, all enemies will focus on him, so the less protected archer and mage and stay safe in the back. This also works to your advantage when employed on the enemies! Try to target the less armored enemies first, like the aforementioned archer and mage types.

3. Synergize with your skills and keep them upgraded!

Your skills also play an important part in turning the tides of battle. Many of them give great advantages to your team, such as the fighter’s valuable God of War skill, which temporarily raises his block rate to 100%. This means he’s completely invincible to physical damage, and that is why you want him to be in the front lines at all time, soaking up as much damage as he can. Another example is the ranger’s Powershot skill, which shoots out a piercing shot in a straight line. If your enemies are lined up, this can take a lot of them out with one shot. You can also upgrade these skills with skill books, which you get from questing and then later on the ladder ranked matches.

4. Whenever you get a new equipment scroll, craft it as soon as possible!

Your might is a measurement of generally how strong your entire team is. Equipment and upgraded equipment are the most important factors when determining your team’s strength. You can upgrade a piece of equipment to level 10. If you want better equipment, you need to find the crafting scrolls. You can see which levels reward you with what. To craft a scroll, you need three things: the scroll itself, the unupgraded item, and a material. You can find materials as you progress through the levels, so when you can, make new equipment. You can also check to see what levels a specific material comes from. New weapons and armor give you a huge boost in might, so it’s very crucial to your team’s success.

5. Enhance your equipment as much as you can!

Gold is plenty in this game, and I really mean it. Just throughout the first couple hours I have already amassed 253k gold! With that said, enhancing equipment is no sweat, since all it costs are low gold amounts and some iron ingots. I’ve already mentioned gold, but iron ingots are also kind of easy to get. They’re not as abundant as gold, but you come across iron veins throughout the levels pretty often so you should never be short on them. That, and you also get them from rewards, chests, and the like. Enhancing your equipment is good because when you make the better version of a piece of equipment, you can transfer the upgraded level of the old item to the new one for a small gem fee.

Before you can buy new heroes in the hero hall, you must improve your military rank. You can do this once you unlock the Battle Court, which allows you attack players. Be sure you check out their team levels and equipment; you don’t want to rush head first into one-sided fight!

7. Enemies too strong? There are a multitude of ways to improve your heroes!

Age of Warriors is an excellent strategy RPG that has a thriving community. We hope these tips serve you well as you train up your team to become the best! If you have any other questions or suggestions, leave a comment below!