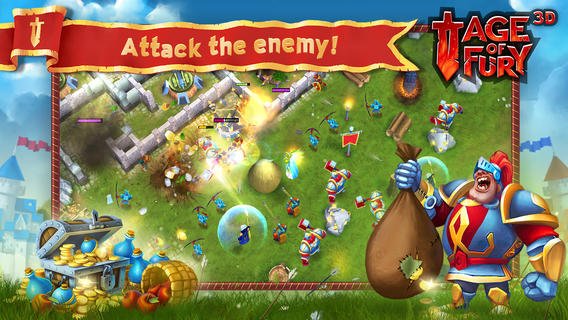 Age of Fury 3D is a brand new strategy game that plans to remove the Clash of Clans from its throne and this one might have just what it takes to do so, including some really gorgeous graphics. Therefore, if you just started the game and you’re looking for some help, you’re at the right place as I am here to share with you a complete set of Age of Fury cheats and tips for beginner players that will get you started, up and running in no time. And don’t just ignore this article if you’re an advanced player, you might still find some things you’re not aware of already!

So let’s not waste any time and let’s check out below Touch Tap Play’s Age of Fury cheats and tips for beginners!

1. Resource buildings first
I know you can’t wait to destroy all enemy players, but you have to turn your kingdom into one that’s sustainable. Therefore, build up your resource buildings first: start with the mines, then with the storage and keep upgrading them. Never attack a single player base if you don’t have room for all the resources that you can get from there, you’ll just waste resources and troops.

2. Take advantage of the Horn
The horn is an incredible power-up that the game doesn’t tell you anything about and you have it activated for the first three days after starting the game. This allows you to “call back” troops that you send in the battle, basically meaning that you can reuse the troops. An extremely useful thing because you don’t have to wait for them to be ready, nor spend resources on training them. In order to activate the horn, though, you will have to tap the horn button during the first minute of the battle – it’s located in the lower left side of the screen.

3. Use mana early on
Mana is the premium currency in Age of Fury and you get a few of it for free at the start of the game. I would suggest spending it on speeding up construction of your buildings in order to speed up your general progress. However, only spend it on speeding up the construction of buildings/upgrades and only when you are sure that you have enough resources to start working on something else – otherwise, you’d be just wasting resources.

4. Focus on building up a military
The defense of your base is not extremely important early on, because you have a small storage space for resources and few people will find it worthwhile to attack you. So focus on building up your military: build and upgrade the Military Camps and get the Military School to level 4 as fast as possible to get access to the Knight, an extremely useful troop that targets defenses.

5. Clean up the mess
But don’t make it a priority! Having a well built, compact base is the best idea because it’s easier to defend it, but cleaning up the debris costs a lot of resources so only do it when you have enough. However, make sure to do it soon in order to have your base in a top notch form.

6. How to build up your base in Age of Fury
Building a base that is easy to defend early on in the game is very difficult because you won’t have enough Walls to help you out. However, you should already start with the outline of your future base: place the Castle in the center of the map and at the center of your base. Around it, you should have the defensive structures and resource silos. For many players, the resources will be the main gain from attacking you, so make sure you have them extremely well defended and surrounded by walls. Then, as you progress and you have more walls available, surround them with walls and try to create as many separate chambers as possible, so that attackers have to break multiple sets of walls in order to get to you.

7. Attack in multiplayer first!
As strange as it might sound, you will be a lot better off not taking advantage of your shield and jumping straight to battle as soon as possible. The single player missions become very difficult for low level players very early and there’s no need to waste your troops on them. Instead, go for multiplayer battles and find players with a lot of resources and take them all for your. It’s really easy to find bases that are not well protected, and these should be your target: your focus at first is on getting as many resources as possible, not winning battles!

8. How to properly attack early on
It really depends on the number of troops you can train and how far did you go with the upgrade of the Military Schools, but ideally, an attack of an easy to beat enemy should look like this: send 4 knights into battle to draw fire. As they are getting shot at, quickly launch a minimum of 10 spies that will head towards the resource buildings and steal the resources. Go for bases with poor or no walls and easy to get to resources. You’ll turn this into a really profitable business!

9. Log in often
The secret to getting a head start is to be extremely active during the first few days of playing: log in often to start working on new buildings and upgrades, attack more players and build up your base. Waiting times are still relatively low and you can still use any mana that you have left.

10. Join a clan
As soon as you have this option available, join a clan. Find an active clan with a decent number of members and join it – this way, you will get into an alliance that will help you with troops and generally make it easier for you to progress.

And, of course, make sure to check back here at Touch Tap Play as we’ll be sharing with you some more advanced guides to help you really take the game to the next level! And if you have any tips and tricks of your own, please let us know by commenting below! 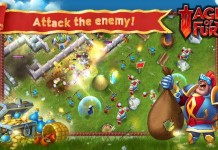 Age of Fury Base Design Ideas for Inspiration