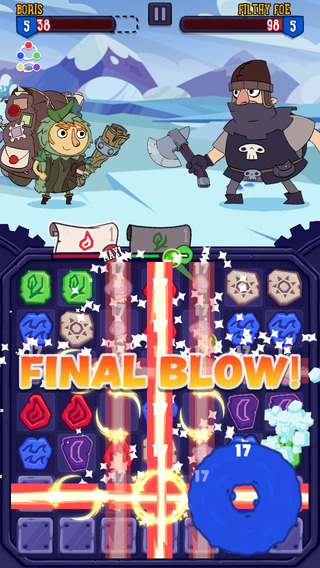 You’ve never played a mail delivering game like this! Adventure Xpress is an RPG puzzle match-3 hybrid that puts you in the shoes of a messenger in a fantasy land full of bandits and deadly monsters! You’ve got a job to do though, so it’s up to you to fight your way through to make sure your letters are delivered in a timely fashion! We’ll provide you with tips to surviving your quest with our Adventure Xpress cheats, tips and trick strategy guide!

There are a lot of baddies to get through on your epic quest to deliver letters, so let’s get started with our Adventure Xpress cheats, tips and tricks strategy guide.

As per the usual for these match-3 RPGs, there are five elements: fire, water, grass, light, and dark. Fire beats grass, grass beats water, and water beats fire. Light and dark beat each other! You can tell the enemy’s element by looking at their name plate – a little icon will display it. Match their weaknesses as much as possible, as hitting an enemy’s weakness automatically doubles your damage!

You’ll notice that each weapon that you can equip has a stat on it called “Runes to Crit”. This number is the amount of runes you need to match in one turn in order to get a critical chance for your next move. When you have a critical chance, your total damage for that turn is doubled for big damage!! You’re going to have to decide though between the two stats. Usually, a weapon will have high attack but also a high amount of runes to crit, and sometimes they’ll have low attack but a very low rune crit. If you’re good at setting up big combos, I would suggest the low rune crit weapons.

Some enemies will attack your rune board! They will mark specific runes, and they will begin to flash. If left alone for too long, the enemy will attack the runes, locking them and rendering them immobile. To free them, you have to match them. To stop an enemy from locking your runes, you can match the affected runes to remove them from the board.

4. Utilize your magic to do extra damage!

As you level up, you’ll gain access to powerful magic to help you turn the tides of battle. The first spell you get is the Fire spell, which is a simple damage spell. It’s relatively weak, but it charges up very fast. Speaking of which, to charge up a magic spell, you need to match runes of the corresponding spell. So, for the fire spell, you match fire runes! Simple! The next spell you get can save your life if used in a pinch: the grass spell! It does weak damage but it stuns, which gives you a free turn. If you want to, you can also spend magic potions to have your spells instantly charged at the beginning of a fight.

When you match four runes, you’ll get one of those horizontal or vertical blasting runes that clears the entire row or column when matched. If you match five runes, you get the bomb runes that detonates in an area around itself. If you combining these special runes, you can get some really devastating effects, such as a three column/row blast, so try to match more than three runes if possible!

6. Pull off combos for big damage!

Setting up combos is a little harder in this game since you can only move runes one place at a time, and every time you do the enemy takes a turn. If you do manage to pull it off though, it’s very well worth it, as big combos do crazy damage. If this is your approach though, I highly recommend – as I mentioned above – to take a low rune to crit weapon, so you get as many critical chances as you can. The low base damage on the weapons won’t matter since you’re going to be multiplying the heck out of it.

That should be enough to set you on your way. Good luck mighty mailman! If you have any other questions or suggestions, leave a comment below! 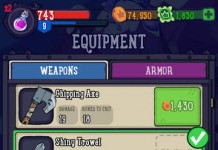