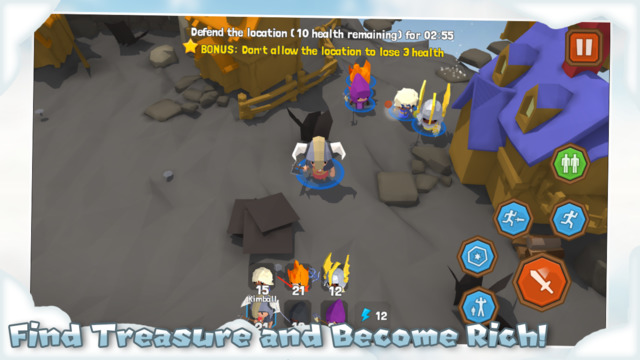 Adventure Company has taken the App Store by storm with its charming graphics and addicting gameplay! As the head of an Adventure Company, you must hire and train new warriors dedicated to finding treasure and relics from ancient times. At its core it is essentially an action RPG with team management on the side. Once your warriors gain enough experience, they can train into a whole new class! Adventure Company is a very expansive game so let’s get right to it with our Adventure Company cheats, tips and tricks strategy guide to running the best company!

There are a multitude of class options you can choose for your warriors, but most of them start out as Trainees when you first recruit them. To make sure that you are prepared for any challenge, it is best to build up a team full of different classes. You should have some melee classes, such as Farmers and Fights, complimented by ranged classes like an Archer. Focusing on individual classes sometimes doesn’t work that well, so expand your horizons!

2. Try to complete the bonus objectives!

Each level has bonus stars on it that correspond to an optional objective. Beware – these bonus objectives are pretty tricky to complete at first! If you do manage to complete them, you will be rewarded with a star for all of your hard effort. Stars can be spent on passive Upgrades for your company, such as experience boosts, mana regeneration boosts, gold boosts, and more. They are incredible helpful but don’t feel pressured to get the bonus objectives on your first time through a level. Most of the time you won’t even be strong enough to do so. You can always revisit earlier levels once you have become stronger, so don’t worry if you miss out on the bonus objectives at first!

4. Set your characters to train before you leave!

If you’re going to be away from the game for a significant amount of time, be sure to set your characters to train before you go. When characters are set to train, they will gain experience once the allotted time is finished. The amount of experience they gain depends on the training boost rate you set before training started. x4 is the default setting and can be set for free if you watch an advertisement. The higher training boosts cost gold, but can be worth it if you are willing to wait.

Early on, you won’t be able to find that much equipment in the levels, so you will have to rely on the shopkeeper. Make sure to buy some weapons for your characters, as by default they will have nothing equipped. Even the common weapons give small stat boosts like more speed, which helps your characters move around faster. Also, be sure you bring the right weapons with you. Early on you will come across a type of enemy that has high physical defense. Right before that you will find an energy sword that deals, well, energy damage! Energy damage goes right through physical defense and is only reduced by energy defense, so picking the right weapon is key!

Every couple of hours a bonus mission will show up on the world map. Bonus missions involve you running around trying to pick up as much treasure as you can. These missions are great ways to earn gems, the premium currency. There is one catch: the other companies will drop bombs on the map the entire time and you have to do your best to dodge! Getting hit by a bomb will deal 999 damage, a guaranteed instant kill. Survive as long as you can and utilize your dash move to get out of the way!

That’s all for Adventure Company. It’s a big game so we haven’t covered everything! If you have any other tips or tricks to share, leave a comment below!