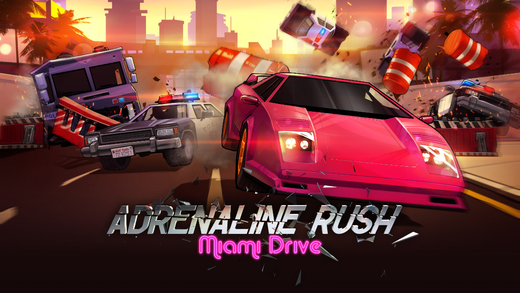 The grooviest car chase is here on the scene! Buckle up and get ready to drive for freedom under the sun of Miami in Adrenaline Rush Miami Drive! You play as Ray Carlton, a driver who isn’t exactly on the cops’ good side. You’ll be collecting coins, attempting takedowns, and more in this exciting chase. We’ll help you get high scores with our Adrenaline Rush Miami Drive cheats, tips and tricks strategy guide.

1. Try to wait a split second before you go in for a takedown!

Takedowns are accomplished by running into the side of a car. When you first start playing, it’s a little hard to judge when you’re going to reach the cars in front of you. If you try to do it too early, you’ll end up rear ending the car in front. What I like to do is wait until I’m about right next to the car, then I swipe in for the kill. This is probably the safest approach, as you will almost always hit them with your tail.

2. Watch out for obstacles!

Obstacles are highlighted by bright obvious red “stop” signs. And rightly so; hitting any of these will almost always mean a game over. The oil slick, for example, dramatically decreases your turning ability, which puts you at high risk for rear ending someone. Avoid at all costs!

The only way to progress through the game is to continually do the missions. Some of them are rather straightforward, like drive a certain distance or collect a certain amount of coins, but others are more specific. Also do note that some of the missions require you to use temporary power ups which you need to purchase before hand. They cost coins, so don’t worry about spending real money.

Aside from buying power ups, you can also spend your coins on permanent upgrades for your car! These range from making the coin picks up worth more to increasing the duration of the various power ups you can buy. If you’ve got some extra coins lying around, go ahead and grab some upgrades!

Whenever you perform a takedown, the meter at the bottom fills up slightly. This is the coin rush bar; when it’s full, you enter coin rush mode, and the coin pick ups are doubled! Be sure to constantly perform takedowns though, as the meter is constantly draining. You can also try to pull off the more dangerous golden takedown, which is done by taking down a car that’s on the opposite lane, meaning you’re going up against incoming traffic! It’s dangerous, but very much worth it if you can pull it off safely.

There ya go, hot shot. You’re prepped to survive the streets of Miami now. If you have any other questions or suggestions, leave a comment below.