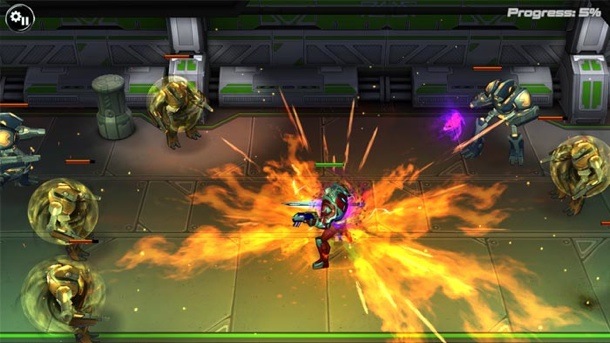 The next game from developer Robot Entertainment is a new space-themed RPG titled Echo Prime which is now available for iOS devices.

Avid fans might recognize Robot Entertainment as the studio behind the popular 2011 tower defense action RPG Orcs Must Die as well as the 2012 competitive iOS strategy title Hero Academy. Echo Prime follows in a similar vein with players being pitted against legions of alien and other sci-fi foes in an action RPG format that includes loot drops, customizable skills and abilities, and an expansive campaign that features randomly generated environments.

During their adventures, players can meet “Echoes”; mysterious beings which will add their power to the player’s and help them defeat some of the game’s more challenging foes. Players can even help their friends through the game’s unique asynchronous multiplayer which allows them to take their friends’ echoes along on their journies and help them level up.

Echo Prime is available now for $4.99 via the iTunes app store. It is compatible with iPhone 4S and above, iPad 2 and above, iPad Mini, and iPod Touch 5 and above. To see the game in action, give the below trailer a watch.