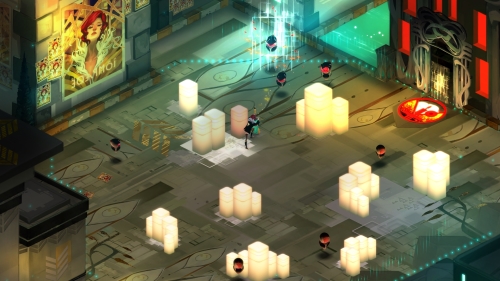 Transistor, the action role playing game developed by Supergiant Games now available on the App Store in all regions, can now be purchased for a reduced price.

Starting today this nice action role playing game is available for purchase for half its full price, $4.99 instead of $9.99. This price drop is only temporary so make sure to take advantage of this deal if you have been interested in the game but didn’t want to purchase it at full price.

Transistor is an action role playing featuring an isometric point of view and plenty of action. Players take control of Red as she travels through a variety of locations and fights enemies. The game employs a unique battle system which combines real time and turn based features, allowing players to fight more strategically.

The iOS version of Transistor comes with all the features of the other releases as well as an intuitive touch interface that works rather well. If you prefer traditional controls, it’s also possible to play Transistor with a gamepad. For the rest, the game is just as enjoyable as on other platforms, making the iOS version perfect for those who want to play on the go.

Transistor is now available for a reduced price on the App Store.