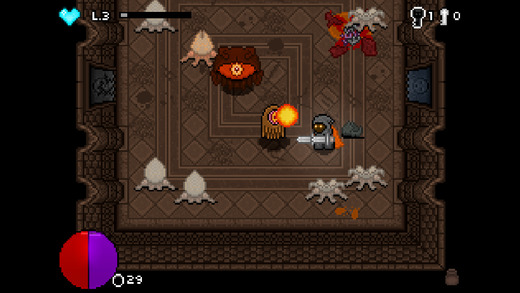 A new action roguelike game has been released on the App Store recently, a game that will make fans of action role playing games like The Legend Of Zelda and the Diablo series quite happy.

bit Dungeon II, developed by Kinto Games, has been clearly inspired by these classic series. The action is fast paced and hectic, with players having to defeat hordes of monsters with a variety of weapons and magic spells. Being a roguelike game, you can expect to find quite a lot of leveling up to do, randomly generated dungeons to explore and a lot of unfair deaths, which will make you lose part of your progress.

Even after you have finally put the soul of your lover to rest, you can still keep playing bit Dungeon II to show these undead creatures who’s their real boss. Thanks to the many different weapon types with different attacks and properties, it will take a good while to get bored of the game.

With its fast paced and varied gameplay experience and 16-bit looking graphics,, bit Dungeon II is a game that lovers of old school action role playing games should not ignore. You can grab the game right now on the App Store for only $2.99