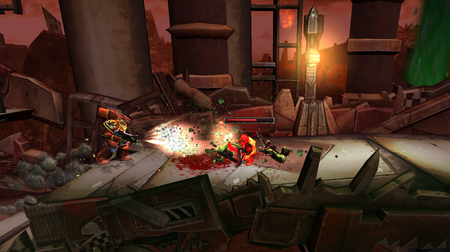 If you’re gaming interest goes beyond video games, you surely know about Warhammer and its futuristic setting, Warhammer 40.000. Even if you have never seen the actual game in action, with its detailed figurines, you still probably already know about it, since several licensed titles have been released during the past few years.

Yet another game based on the Warhammer license has been announced today, a that’s a bit different from the many other Warhammer games released in the past.

Warhammer 40,000: Carnage is an action game starring a Space-Marine super soldier that will have to kill some Orks. Actually, more than some. Several different weapons will be at the Space-Marine disposal, like boltguns, chainswords, grenades, hammers and more. If all these weapons weren’t enough, you will also have the ability to upgrade them and access some crafting features.

Warhammer 40,000: Carnage also comes with some multiplayer features, that will allow gamers to team ip in the Fireteam missions. Slaying Orks is way more fun when you can share the carnage with others, don’t you think?

Warhammer 40,000: Carnage will be releasing as a paid title sometime during May. According to the team, the game will be receiving free contents at regular intervals.

Action Game Warhammer 40,000: Carnage Launching During May On iOS