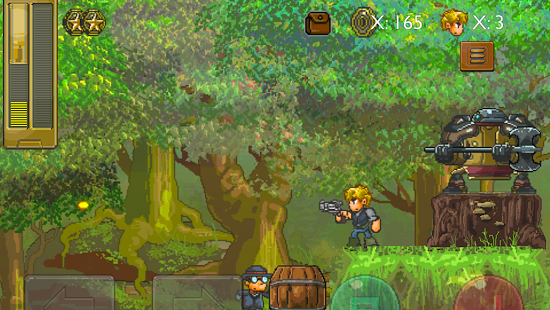 A new high speed action game is going to be released later today on the App Store. Fans of the classic Megaman series will definitely enjoy the game as well as all those who love shooting enemies while avoiding traps and performing tricky jumps.

Steam Punks, developed by Monster Robot Studios, is a game that doesn’t try to hide its main influence. Just like in the successful Capcom series, players will have to explore some linear stages, defeat enemies, avoid traps and pitfalls, and finally defeat the final boss of each stage.

Players will be able to explore stages in any order and obtain some powerful new weapons that can be upgraded. Between stages you will also be able to explore a hub town where you can buy items from shops. Does this sound familiar?

What sets Steam Punk apart from Megaman is its setting, a steam punk setting with a clear Victorian age influence. The game will not break any new ground but it will still be an enjoyable experience to play on the go.

Steam Punks will launch later today on the App Store. The game, which will be playable on both Iphone and iPad, will be yours for only 1.99$.

If you fear a derivative gameplay experience is not for you but you’re still interested in the game thanks to the unique setting, you can clear your doubts by checking the gameplay video right below.