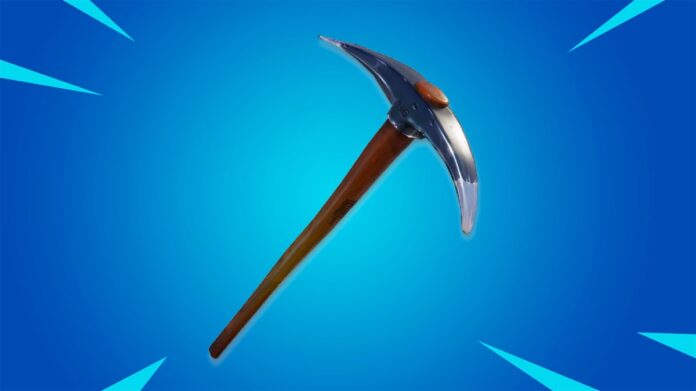 Harvesting tools in Fortnite are generally known as pickaxes despite many not technically being a pickaxe. They are an essential tool for the game and every player has one for harvesting materials, knocking down builds, or using as an emergency weapon. There have been hundreds of them released through the Battle Pass, sold in the Item Shop, and as bonus rewards. We have collated 10 pickaxes we believe to be some of the most popular harvesting tools ever purchased or unlocked in Fortnite since it began. Check out the list below!

First up may surprise some, but will not surprise everyone- it is the Default Pickaxe. This is the first pickaxe every new player uses, and is still in constant use today. Some people just love the simplicity of the design, while others feel a nostalgic attachment to it. Either way, it remains a popular pickaxe.

This creepy tool can be found being used by some of the sweatier players, particularly those in the corresponding skin from the Ouroboros set. The Vision harvesting tool cost 800 V Bucks in the Item Shop.

This festive piece was last seen in 2018 and comes from the Frosty Fights set. It is an Epic rarity harvesting tool that only ever arrives in the Item Shop at Christmas time, for obvious reasons. Because of its rarity it would normally cost 1500 V Bucks. Even outside of that wintery time, players still seem to love using it!

One of the best looking harvesting tools in Fortnite, the Cosmic Llamacorn can be seen at least once in every lobby. This one is not, and never was, available to purchase from the Item Shop, but was in fact a December 2020 Crew Pack reward as part of the Galaxia Set.

This delicious harvesting tool was unlocked in the 2018 Season 4 Battle Pass and is part of the Sweet Tooth Set along with Zoey and the Sugar Crash Glider, which are used less often. It remains popular today despite it being release years ago.

This simple but effective design is a popular choice with Fortnite players due to it being cheap but still pretty fierce-looking. It costs 500 V Bucks in the Item Shop, and is part of the Arctic Command set along with Absolute Zero and Arctic Assassin.

The Reaper is a scythe rather than a pickaxe and is a reoccurring harvesting tool to the Item Shop, only turning up at Halloween. It is another that has a simple but elegant design, costing 800 V Bucks in the Item Shop.

This harvesting tool comes with an alternative colour scheme- blues and greens- to match the basketball-playing axolotl ‘Axo’ skin which belongs in the set. It costs 500 V Bucks and remains popular due to it fitting with a lot of other skins available.

A relatively recent addition, but made very popular due to the Astronomical Event that occurred in 2020, gaining the attention of millions of fans. This pickaxe is a diamond studded reminder for a lot of players of that fun night. It cost 800 V Bucks and is part of the Travis Scott set.

Many of you won’t be surprised by this addition as it is used by a lot of streamers and professional Fortnite players. The Star Wand was first seen in 2019 but revisits the Item Shop pretty regularly where players can buy it for 800 V Bucks.

Let us know in the comments below if your favourite has made the list, or if you would add a different pickaxe!

10 Most Popular Fortnite Pickaxes Ever