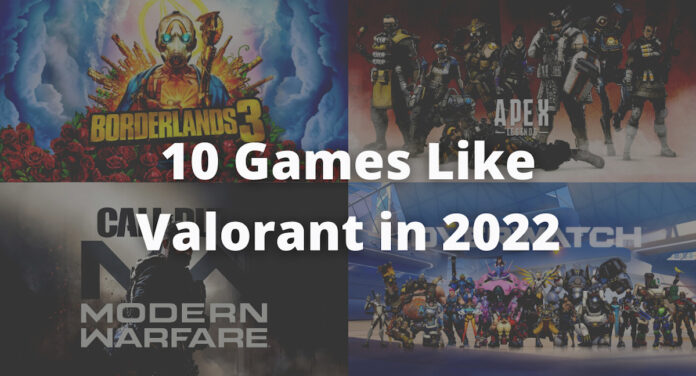 Valorant is one of the most popular and most competitive FPS shooters ever since it launched on PC. It has amassed millions of players and continues to expand its base after Riot Games announced that a mobile version is in the works.

Like Valorant, there are tons of other FPS shooters that bring an exciting experience to players, and in this article we’ll be listing the 10 games like Valorant you can play in 2022.

This is a free to play game that brings loads of fun, interesting characters with special abilities. Valorant fans will appreciate the character abilities in this game as it is very similar to that of Valorant.

Paladins also offers other gameplay similarities that allows players to dive into its world and experience a thrilling shooter experience.

The famous tactical shooter continues to compete across all platforms and remains a competitive title that focuses on various aspects such as gadgets and operators. And like Valorant, Rainbow Six Siege also provides a one of a kind experience through its operators and maps.

As a high tactical game, it offers similar features to Valorant. Players will need to have a pretty good team coordination in order to be victorious in both games.

The acclaimed battle royale shooter cannot be left out of our list as it offers very close features with Valorant, such as its 3v3 arena mode. Apart from this, Apex Legends also gives players the choice to hop into the game of their choice with any legend character.

And like Valorant, Apex Legends is a high paced game that comes with its own set of charms. Fans of Valorant will definitely have a great time with it.

Activision’s Call of Duty Modern Warfare is one of the best games (franchise) ever released and in terms of similarities with Valorant, the game also offers its own search and destroy game mode.

Other than that, Modern Warfare allows you to choose from a wide range of modes that keeps the multiplayer experience fun all the way through. There’s also a thrilling and overly exciting campaign to keep you glued.

The competitive shooter has long been one of the best free to play titles, and has kept its reputation through 2022 as well. It shares a few similarities with Valorant, especially in terms of weapon mechanics.

However, CSGO is a game that takes a simpler gameplay approach and doesn’t involve having unique agents with their abilities. It also remains one of the most difficult games to learn as it allows the use of intricate utilities as well as maps that require major coordination as well.

While it’s not a very popular game due to its underated status, Spacelords is still worth adding to our list as it is quite similar to Valorant as well. It’s a hero shooter-style game with up to 17 unique characters to use and enjoy.

There are more than 60 weapons to unlock and use, as well as over 480 character cards as added bonus. The game offers a gripping and immersive storyline with a 4 vs 1 campaign that allows you to join the side of the Raiders who wish to liberate a Broken Planet.

This is yet another game that comes with similar features to Valorant. The game puts you inside a world that allows you to discover potent abilities and death-defying skills.

You’ll get the choice to choose from a comprehensive array of hero classes with a myriad of weaponry, which you use to topple foes.

Overwatch is definitely a game worth playing. While some might argue that it betters Valorant in many aspects, it’s ultimately up to you to decide which you love best. The game sees you control heroes with unique abilities in a rapid-paced gunplay.

It has some dynamic locations, and like Valorant, requires you to be cautious at all times as enemies are lurking in every direction. With that said, the difference in both these games isn’t massive, and players will greatly appreciate the fast-paced gunplays they both offer.

If you’re after crazy in an FPS game, then look no further than Borderlands 3. The game offers a narcissistic and ritalin-fueled world for players to explore and it does not hold back. In terms of similarities with Valorant, the campaign spectrum is one to consider as it can be played in co-op mode with up to 3 players.

However, Borderlands 3 is not a free game, unlike Valorant. And it’s not a team-based online hero shooter either. It prioritizes the storyline aspect more than most, but as aforementioned, players will definitely get a kick out of its co-op mode.

For those who can’t seem to get enough of Valorant, they’ll definitely enjoy Epic Games’ highly acclaimed battle royale success, Fortnite. The behemoth free-to-play cross-platform title is available on multiple platforms to play and continues to amass millions of players worldwide.

Being available on PlayStation makes it one of the best titles like Valorant. Fortnite continues to grow and expand in such that it has collaborated with more characters from other franchises than any other IP in the world. That’s insane, and if you’re looking for a Valorant alternative, Fortnite is definitely worth checking out.