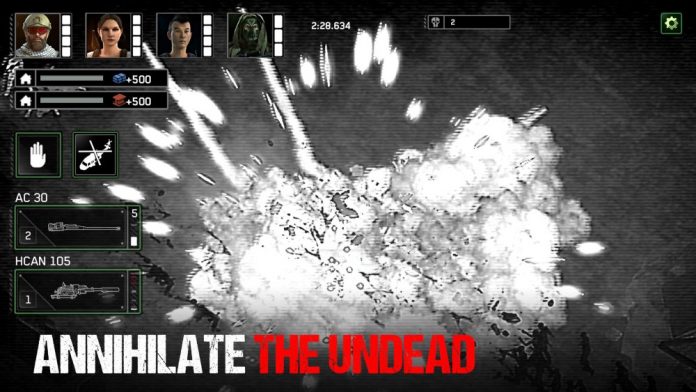 Zombie Gunship Survival is original, innovative and highly addictive. With great gameplay and visuals that really make you feel that you’re in a world ravaged by zombies, this is definitely one of the best free mobile games we’ve played in recent times. And we’re here to try to make your experience even better by sharing with you some Zombie Gunship Survival cheats and tips in a complete strategy guide.

There are many things to consider when playing a game as complex as ZGS and we’re here to make sure that you keep everything accounted for. So let’s not waste a single second and let’s check out below some Zombie Gunship Survival tips and tricks!

1. Constantly work on upgrading weapons
Keeping the weapons upgraded is extremely important for the success of your missions. Focus first on the main weapon you have equipped. I consider the 5.56 Machine Gun as the best option early on. So focus on it first and invest the most there because that’s your main weapon against the zombies. Then, if you have spare parts, go for the secondary weapon and finally your soldiers’ weapons, because they will use those the least in the game if you do a good job.

2. Level up & Fuse
The best part about upgrading weapons is that when you reach a certain level, you can fuse them and increase their power and star rating. The first level when you can fuse, for example, is 10. The best part about fusing is that you don’t need a max level weapon in order to do so. This might change in the future, so make sure that you fuse your main weapon as much as possible when it’s easy to do so.

3. Your Base Guide
Building a great base and defending it properly will help you get further, faster than others. Defending your base is a mission that you can go for every 4 hours and it’s something that you should always do because it’s easy resources.

Repair all buildings on the base as soon as you are allowed to do so in order to have as many things in the way of the zombies as possible. If you level them up, it’s even better because they will keep the zombies busy for longer. But focus on leveling up your headquarters first in order to unlock more buildings, then slowly work on leveling them up as it is a costly process.

When defending your base, a solid design is needed. Try to keep an eye on the zombie nodes as that’s where your enemies will come from. Build barricades to prevent them from advancing easily, then place the towers behind the barricades, but in front of the three buildings you must defend. Then keep an eye on everything from your plane and take out zombies as you do in a normal mission. Your three main buildings have a ton of hit points anyway, so defending your base is usually an easy job.

Finally, don’t forget to work on removing the zombie nodes whenever you have the chance. That gives you a huge bonus in battles and makes defending it a lot easier. A good strategy here is to try to remove the zombie nodes on one side, leaving them on a single side. This makes it easier to defend with towers and your own weapons.

4. Attacking Guide
When attacking, always take some time to plan the best route. Sometimes, going near an enemy tower is the best bet, but on most occasions it’s not. The reason why I say that is that these towers will also shoot at zombies, proving extremely helpful for your mission. They seem to target you first and the zombies later, but your soldiers will still enter the buildings even when shot at, so keep the towers alive for as long as they are useful. Usually, I destroy them after looting all the buildings, when my soldiers just sit there waiting for the chopper and getting shot at.

Also take zombie nodes in consideration, as well as obstacles they have in the way. Try to find a route that allows your soldiers to pass without opening big areas for zombies to get through. As long as the zombies have to waste time destroying obstacles, it’s a lot easier for you.

Finally, don’t forget to zoom in and zoom out with your weapon. Remember that there’s a bit of a delay between shooting and your bullets reaching the target, so always have that in mind when aiming.

5. Your Soldiers
Although you don’t have direct control over your soldiers’ movement, you decide what weapons they use. The long range weapons are the best choice in most cases and for most soldiers. But it doesn’t hurt to have one equipped with a shotgun for those moments when zombies get too close.

When in battle, you can also give them some basic commands. You can use the hand icon to make them stop (which is rarely useful, but there are cases when you might want to take out a tower first, for example). You can also rush the arrival of the chopper if you don’t want to loot all buildings for some reason (like zombies piling up) and you can also tell your soldiers to abandon looting a building before collecting all resources. I rarely use these three options and I don’t think you should waste too much time with them either.

6. Complete daily missions & open crates
Make sure that each day you complete the daily missions. They offer solid rewards and are really easy to complete. Also, don’t forget to always be working on opening crates: go for the fast ones when you start playing, then leave the ones that need longer times for those moments when you are away from the game.

These would be our Zombie Gunship Survival cheats and tips. If you have other tricks or strategies that you think other players would find useful, don’t hesitate to share them with fellow readers in the comment section below!