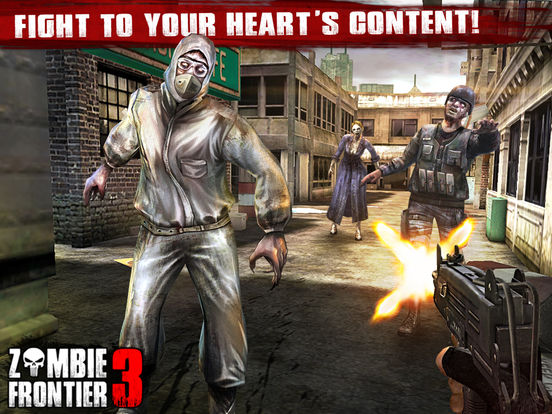 The Zombie Frontier series is back with another undead horde to slay! Zombie Frontier 3 has more guns, more levels, more powerups, and of course more zombies to take out! Zombies are coming at you from all directions, so you’ll need to stay alert to make sure you don’t end up lunch. We’ll help you survive the zombie apocalypse and maybe even have some fun with our Zombie Frontier 3 cheats, tips and tricks strategy guide!

Headshots do increased damage and they almost guarantee the zombie will be staggered – that’s the most important part! Even when you’re getting bum rushed, staggered zombies buy you valuable seconds that could mean the difference between life and death! Make sure to aim down the sights to make it easier. It’s possible to headshot with hipfire, but it’s a little bit tougher. Here’s a little tip: even if your weapon in automatic fire, try shooting in small bursts. It’ll reduce recoil and steady your aim a bit. Make every bullet count!

After the first couple of main missions, you’ll unlock the Daily Challenge. This won’t be so important later on but early on in the game you’re going to be really hurting for gold. The daily challenge can be completed once a day and you get around 500 gold for doing so. Considering that the support missions usually only give you somewhere around 100-200 gold for completing them, the daily challenges are a big part of your income. Be sure to do them every day!

The M629 and the M10 you start out with at the beginning of the game should last you sometime. You’ll need to upgrade them of course, but it’s better than pouring the gold into a brand new gun. The new guns actually aren’t that great starting out and they need a lot of upgrades to make them worthwhile. Unfortunately new guns in this game cost a ton of gold, so you’re going to be stuck with the two starting weapons for a while. So before you buy any new guns, we recommend just maxing out the two starting ones.

Out of ammo? In a bind? In some situations, it might be better to just switch to your second weapon instead of reloading. Depending on how far you’ve upgraded your guns’ reload speed, you’ll need to judge the time it takes to reload versus the time it takes to switch weapons. If zombies are getting too close for comfort, just switch! Keep in mind that your previous weapon does not reload on it’s own! If you run out of ammo on one gun and switch to the other, run out of ammo there, you’ll be completely dry until you reload one of them. This can be really bad, so try to sneak in a reload here and there!

That’s all for Zombie Frontier 3. If you have any other tips or tricks to share, let us know in the comments below!