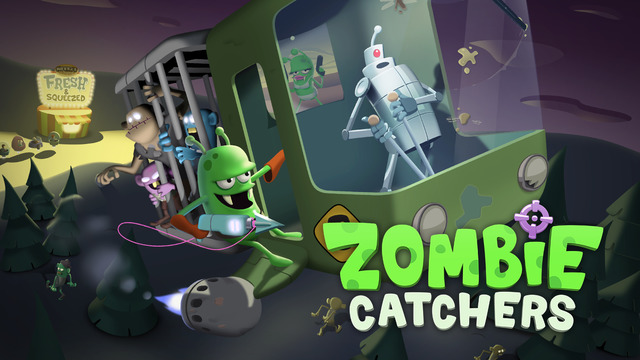 Zombie Catchers is a creative hybrid platformer/business management game! You play as two aliens who have set up shop on Earth and are selling juices made out of… zombies! Who knew that the undead could be so delicious? We’ll help you become the ultimate zombie catcher with our Zombie Catchers cheats, tips and tricks strategy guide!

The missions, like usual, will take you through the general progression route of the game. If you’re not sure what to work towards next at any point, then just look at your missions. They’ll show you the next best course of action you should take! You can even tap on the mission to take you directly to what you need to do.

2. Take out the little critters!

During the hunting segments you might see little creepy crawlies roaming around, like snakes and bats. Be sure to take these guys out with your harpoon gun, as touching them will temporarily stun you, giving time for zombies to escape! They’re also worth 10 coins, which isn’t much, but every little bit helps.

3. Chase zombies away from the escape points!

There are green bushes at the ends of each hunting area. When a zombie reaches this point, he’s home free, so you want to try to keep them away from it. When you’re luring out zombies from the swamps, try to leave the brain bait in the direction away from the closest escape point. For example, when you first start out, you’re usually close to the left side. If there’s a swamp nearby, you want to put the brain on the right side, then hide on the left. When you jump out at them, the zombies will start running towards the right, giving you the most time to chase.

4. Watch out for the green zombie’s projectiles!

Unlike the yellow and blue zombies, the green zombies are packing heat! When they spot you, they will immediately toss whatever they’re holding in their hand at you. If you’re hit, you’re stunned! Always watch out for them, and watch their alert meter. When the exclamation mark fills up all the way, that’s your cue to dodge!

5. Use charged shots for bonuses and armor!

Some zombies will have armor on when they rear their ugly heads out of the swamp. These zombies will take extra hits to capture, making them a pain to deal with! Fortunately, you can charge your standard harpoon gun to fire a stronger shot. This deals more damage and extends the reach of the shot, so it’s almost necessary to use them for armored zombies. You can see how strong a zombie’s armor is by the blips below them. Do note though that if you jump when you have a charge ready, you’ll lose the charge. If you manage to nab multiple zombies in one shot, you get a multiplier bonus, granting you more coins!

6. Try out the different sub weapons!

There are sub weapons you can bring with you, alongside your harpoon gun. The net gun fires a wide net that can easily capture multiple zombies in one shot if lined correctly. The tranquilizer is a fire-and-forget type of deal where a tranqed zombie will eventually be captured. It’s ineffective against armored zombies, though! Try them out and see which one you like the best.

7. Use the jetpack to gain ground!

The jetpack seems a bit unnecessary at first, but I found out that you move slightly faster in the air when you’re boosting. If you’re on the chase, utilize the jetpack to catch up with the zombies faster than running after them.

Your business depends on how well you can catch those zombies, so get to it! If you have any other questions or suggestions, leave a comment below!