If you’re looking to get more from the recently released World War Rising for mobile, you’re at the right place! We have some World War Rising cheats and tips for you in our strategy guide that will help you build a solid base and nation and get the most out of this game.

Although there are more complex strategy games out there on mobile, World War Rising is still a fun game that does everything by the book and offers a nice alternative to some other games out there. Its main advantage is that you can play it in shorter bursts and you don’t really have to spend hours planning and attacking, which is always a great thing if you don’t have a lot of time.

But let’s focus on the guide now – let’s check out below some World War Rising tips and tricks to help you get started on the right foot! 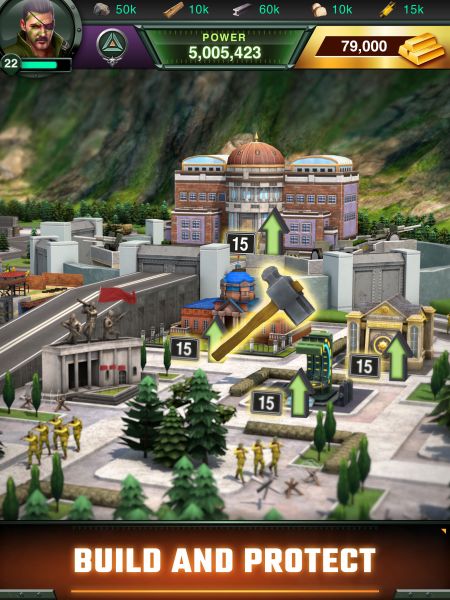 Constantly upgrade your base
Just like in any other MMORTS games out there, your main task is to upgrade your base and level up all the buildings around in order to increase your power, unlock better troops and generally be a force to be feared in the virtual world of the game.

Basically, you will always have to keep your builders busy, always working on something. This is a general rule of thumb, I could say: always keep everybody around the base busy, building and researching and training. This is the only way to get better than others and reduce the chances of being farmed upon.

With the buildings, the order in which you upgrade them – especially early on in the game is not that important. But as the timers start growing and you have to wait more and more, you should prioritize and always start working on the buildings that offer you an immediate benefit (like training better troops, improving your strength and so on).

Complete the various types of missions
There are all sorts of missions that you can complete in World War Rising and you should constantly work on getting them done in order to reap on the rewards.

We have the base missions that you will normally complete by simply playing the game – but it doesn’t hurt to look at them every now and then to make sure that you’re not missing out on something. These base missions should be followed especially early on as they’re a sort of a guide for perfect progress in the game.

Apart from the Base missions, we also have the Hero and Alliance missions. These are easier and only require time to be completed, and they will reward you with nice loot constantly. I would recommend starting with these missions as soon as you log in to the game – and choose one of the shorter durations available, so that you complete as many as possible during your play session. Then, when you log out, start working on the longest mission available in order to optimize rewards. 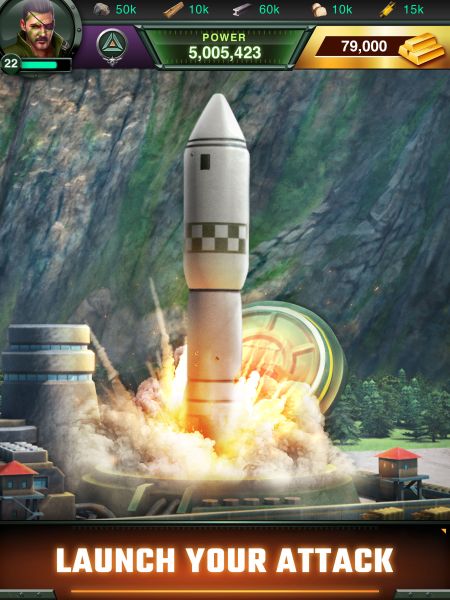 Launch missiles at your enemies!
One extremely interesting feature in the game is that you can build and launch missiles at your enemies. These take time and preparation, but are a really cool way for you to either weaken the forces of a real player you want to attack, or make the AI forces on the map suffer a horrible fate, all for your enjoyment (and tons of rewards).

There are multiple missiles that you can build in your Rocket Silo, each with different results, so you should always keep your options open. We’ll talk a bit about the different types of Rocket types in the game:

Supply Drone: This is something you should focus your research on because it basically is a way for you to get free resources. You can only gather the resources based on the level of your drone, per the resource selected – so make sure to always work on getting better supply drones.

Syndicate Attack: This is unlocked by default and the missile you will most likely use the most when it comes to attacking other players or the AI. This basically deals a ton of damage to a single target and also has an Area of Effect radius, meaning that it will also cause damage to nearby buildings/troops.

Resource Destroyer: If you really want to be mean with another player, you can send the Resource Destroyer their way. This will destroy the indicated resource on the player’s base. This isn’t really that useful in my opinion since it’s better to attack players and get their resources, not just nag them by destroying them…

Troop Attack: Now this is a different story! An extremely useful rocket when it comes to attacking other bases because it deals massive damage to their troops, weakening their defenses. This is a must use before attacking another player – and the higher the level of your rocket, the better since it will do more damage!

Train various types of troops
The troops you can train in World War Rising follow the rock, paper, scissors rule. This means that one troop is strong against another, but weak against a third. The exception is made by the Operative, which is a strictly PvP focused troop, which targets the enemy’s wall (but is weak against all other types of units – so not good to send in regular battle).

However, with these in mind, you should spend some time building a nice, solid army that is varied and pretty much even, so that you can adapt to various types of enemies. Alternately, you can risk it a bit and focus on just one (or preferably two) types of troops.

This strategy will give you an advantage over those who train all three troops equally, but also means that you are more open to attacks coming from players who have trained exactly the troop your current two are weak against. But with great risks come greater rewards, so it might be worth it in the long run! 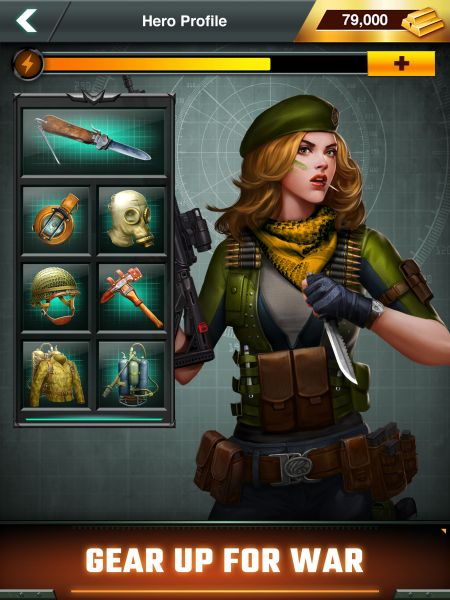 Build up your Hero too
Your hero is the commander of your troops and you should never forget about working on developing them as well. You can access the Hero menu from More – Hero in the bottom menu bar, and from there you should equip items and work on their skills.

Constantly attack the Cerberus on the map
Even though the biggest resource rewards come from attacking other active players, it’s a lot safer to target the Cerberus units on the map and constantly attack them. They will still give you nice rewards and XP for your hero and can also be targeted with missiles. Try to completely eliminate one target on the map (by focusing on attacking it over and over again) for better rewards.

Join an active alliance
Being part of an active alliance is essential in this type of games, so make sure you’re in one. Don’t be afraid to leave an alliance if you are not satisfied with the activity level because it’s only to your benefit to be in a good, active one.

Apart from the fact that fellow alliance members can help you speed up construction and research, there are many other benefits that you can have from your alliance: from spending the Loyalty points for a ton of items in the game to the ability to take part in Wars and receive reinforcements to protect your base… everything important happens here and the alliance can make it or break it for you.

Research new tech
There are so many technologies to research that I doubt you can ever get them all researched. But you should try nevertheless because these researches will unlock a lot of goodies and help you build a more powerful nation.

Apart from the research that you should focus on for your rockets (the supply drone first), I recommend focusing on the Combat researches first, then everything else. 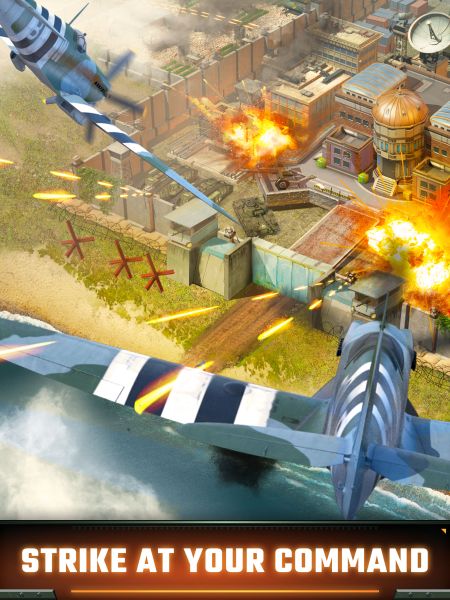 Level up your command center when all other structures are maxed
Your Command Center is the main building in the game basically deciding what you can build and the maximum level for your structures.

So even though some prefer to rush through the levels in order to have access to better stuff (like getting access to better troops), I believe that it’s better to go the safe route and only upgrade your Command Center when every other building in your nation has been maxed.

This way, you will always know that you have a perfectly balanced base built, one that s easier to defend and which grows in harmony on all levels.

Don’t forget about your defenses!
Even though your troops will be the main defensive element when other players will attack you, there is something extra you can and should build in order to improve your chances of repelling enemy attacks: Wall Defenses.

You can access these either from your nation’s screen, or from the More Menu – “Build Wall Defenses”.

Use the Speed-ups early on
You will earn a varied amount of speed-ups when playing the game, as various rewards from the missions you complete. Don’t hoard on these and instead use them to complete everything faster. The speed-ups will become less and less useful (or at least they’ll have less of an impact per speed up used) as you go up the levels, since the timers will increase drastically at higher levels.

So use your 1 minute and 5 minute boosters when they count, in order to upgrade everything faster and get your base in a decent shape as soon as possible!

Get Free Premium Currency from the Treasury!
One extremely interesting feature that World War Rising introduces is the Treasury. This allows you to deposit some of your premium currency (Gold) in it and get 10% bonus after 2 hours. This is basically free money and even though it’s not a lot at level 1, you still get 10 free Gold every 2 hours, or a maximum of 120 per day… which is really nice.

You can upgrade the Treasury by making purchases with real life money in the store and this will increase the rewards. Great deal in the end – so don’t forget to take advantage of it early on and constantly have money deposited there!

This would be all that we have for you in terms of World War Rising tips and tricks. If there are more advanced strategies that you would like to share with fellow players, don’t hesitate to do so by commenting below. 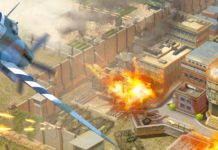