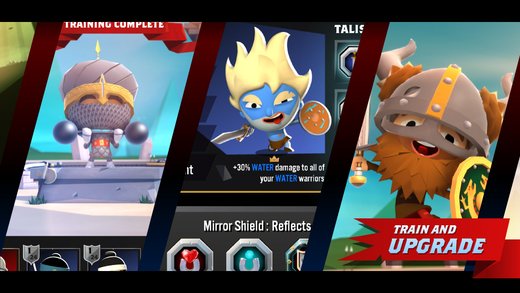 Even though initially the game’s title made me think of World of Warcraft, World of Warriors is actually a completely different and quite unique game available on iOS-powered devices. I loved playing it so far and I still have a long way yo go, but I decided to take a short break and share with you below some World of Warriors cheats and tips to help you develop a perfect strategy for this great game.

So if you seem to get stuck, or you simply want to get more from the game, read on for our World of Warriors tips and cheats!

Learn the elements and strengths
Following a rock, paper, scissors formula, some elements are better than others. Fortunately, you will know what elements you’ll battle before starting a fight and you won’t have to memorize the strengths either as they will be shown during the battle scenes. Just make sure that you look at the background of the active warrior and always use one that is strong against the enemy!

Switch between your active warriors
Especially if they’re about to die, it’s a good idea to make the switch: maybe with a healer, maybe with a stronger unit and then use it against a weak element. If nothing can be done, try to go in style, especially if fighting against an enemy you’re strong against and use a special attack.

Prepare for the special attack of each warrior
Speaking of special attacks, you should always be prepared when one is triggered, for example when switching warriors. There are different things that you have to do to correctly execute a special attack, so make sure you are ready and know the requirements.

Quickly collect the dropped goodies
Get blue dots, red hearts and other pieces for crafting, ignoring everythng else. You have to be pretty fast, though, otherwise all it’s lost.

Use your mana first
Unless you need to change if facing a warrior you’re weak against, I would suggest to start by using a special attack. You will quickly get at least three mana during the early stages of the fight so you can switch – but you can only have 6 mana, and if you don’t use it, anything extra just goes to waste.

Choose the right leader
The “right” leader is not necessarily the rarest card you have. Depending on the elements you’re facing and based on the bonuses given by each warrior, the correct leader might change from mission to mission. Just make sure that you always check the enemies and the bonuses offered by your warriors and place the perfect guy in the leader’s position (for example, when fighting generic elements, use the one that gives a bonus to all the others)

Use the talismans wisely
Talismans give you great powers, but they also have a limited time usage, so don’t rush to use them as soon as you get them. Check out the missions and decide if you really need them and what talisman to use. The golden rule of thumb is that the further you go in World of Warriors, the more difficult the fights.

Connect to Facebook
You will get some extra premium currency in the game, as well as the potential to gain a ton more Honor Stones that in turn increase your chances of getting rare or legendary warriors. Add some friends and you’re all set!

Train all warriors
Some are weaker than others, I know, but you can’t be too picky: if a warrior levels up, spend the coins to train him or her and you will get a better fighter. It would make most sense to bring into battle the rarest warriors that you have, but if you need a specific element and only have a weak card, it might be better than a rarer one but weak against that element.

I’m still playing and if I find anything else that I consider useful, I will make sure to share it with you. If you have other tips and tricks for World of Warriors, let us know by commenting below!

World of Warriors Cheats: Tips & Strategy to Keep on Winning