Woody Battle Puzzle, created by Athena Studio, is one amazing multiplayer battling puzzler for Android. The goal is simple: beat your opponent before time runs out, but making that happen is not as easy.

So if you’re wondering what to do to win all the rounds you play in Woody Battle Puzzle, you’re at the right place: our Woody Battle Puzzle tips and tricks will help you learn the basics and improve your strategy to keep on winning, even when your ratings are high and the opponents are more difficult to beat.

Because even though things seem to be pretty straightforward, there are some things that will help you get the advantage over your opponent and win the round. So let’s check out all the Woody Battle Puzzle tips below to help you win constantly.

Don’t think about the 500
You have 3 minutes to get to 500 points (or whatever the number is based on your ranking): whoever does that first wins the game.

In reality, though, it will rarely happen for a player to reach that amount of points during the 3 minutes, so you shouldn’t really worry about that too much. Just look at the score every now and then and try to stay ahead of your opponent, although if you take your time to build the board for that perfect match, you can overtake them easily.

All in all, don’t think about the points – most likely nobody will get there in time, but instead focus on your board alone and do your best to score as many points as possible. 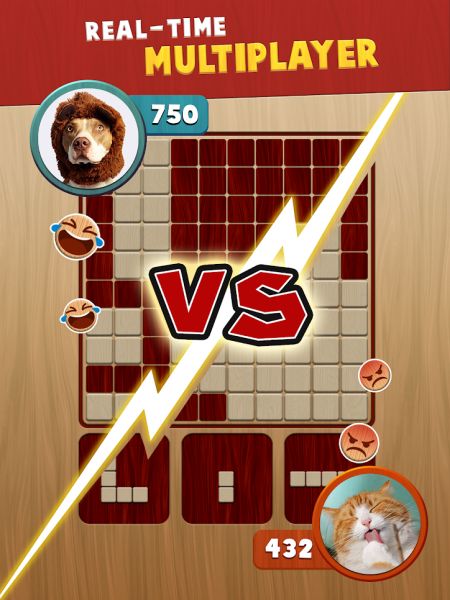 More lines, more points
This is the most important thing that you should have in mind: the more lines you remove at a time, the more points you’re getting. Therefore, take your time to build up your board and remove more than one line at a time in order to get huge boosts to your score.

The easiest way to remove multiple lines is to go for three in a row. However, if you are a bit lucky and strategize well, you can take advantage of the fact that both vertical and horizontal lines count and you can remove six at a time. This is really difficult and risky business, so better stick with the safe and secure and remove 2-3 lines at a time instead.

Take your time
Although you’re racing against the clock and you have a skilled enemy scoring points, if you hurry you won’t get big results. Instead, take your time and strategize, planning your moves and trying to get the most out of each piece you place on the board.

When placing a tile on the board, always take a fraction of a second to make sure that it won’t create a line where you don’t want it to. On many occasions I ended up creating a vertical line when I was actually building for a few horizontal ones. Don’t make the same mistake and take all potential lines into account.

Always try to fill the gaps – the smaller ones with the one – two piece tiles and patiently work towards your goal. I have often managed to beat opponent simply because they got stuck for rushing things out, leaving me with 30 to 60 valuable seconds to plan my moves and overtake them in terms of score. 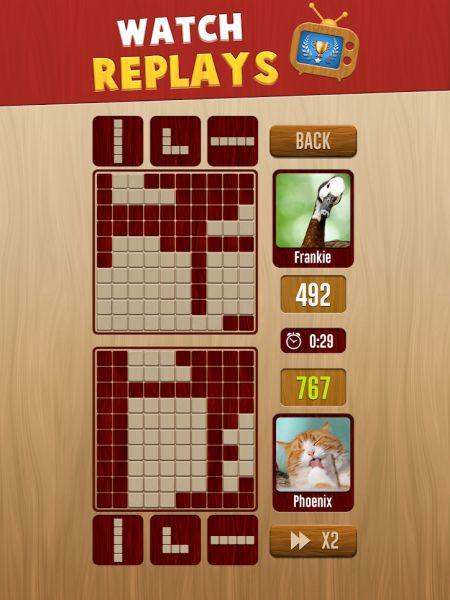 Always leave enough space for large pieces
The biggest problem you could encounter in the game is getting a large piece that you have no place for on the board. Usually, the 3×3 (or are they 4×4?) squares are the most difficult to deal with later on in the game.

However, you can reduce the chances of them destroying your run by simply playing with them in mind: always be prepared for such a piece and either have enough room on the board at all times to place one in case it appears or risk a bit and keep a line or two ready to be created in order to make room for the large one.

The latter option is a bit riskier since you might not get the tiles you receive, but in Woody Battle Puzzle, with great risks come great rewards.

Consider verticals and horizontals
I am not sure if this is a problem that more players have to deal with or is something specific to me alone, so I left this for last – although it’s pretty important if it’s happening to you too.

The thing is that my mind is set to generally work towards creating lines horizontally. However, the game works with vertical lines as well and having these two potential directions in mind, you can achieve a lot more: there’s no other way of getting 6 lines in one go without considering the vertical options as well!

Even more important with these vertical lines is planning for fewer matches: on many occasions I placed a tile that created a vertical match when I was actually building up my lines for horizontal ones. This can really mess up your strategy and points, so try to always look at the big picture and remember that you have two potential directions for creating lines.

Watch the replays
Whenever you lose a fight, it’s a good idea to watch the replay and see what did your opponent do to win. You have a lot to learn from people playing the game flawlessly and you can steal some of their moves and tactics and use them in future battles.

This would be our Woody Battle Puzzle guide. If you have additional strategies that work and help you win the battles, don’t hesitate to share them with the world in the section below.