Home Game Guides Will Madden 23 be on EA Play? – Answered 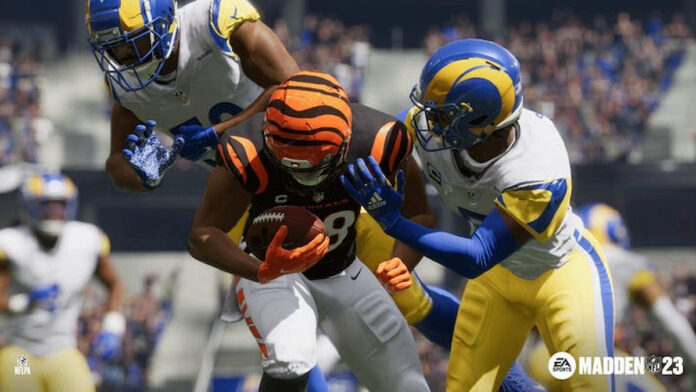 Electronic Arts’ highly anticipated Madden NFL 23 is finally here with a new football season for players to enjoy. So, will Madden 23 be on EA Play? We’ll be answering that in this brief guide.

EA usually releases new Madden titles every year and a number of players have slammed the series for being the same each year with little difference. In Madden 23 however, there are multiple improvements to the age-old formula that EA had worked hard to present players with a much fun Madden NFL 23.

Will Madden 23 be on EA Play? – Answered

EA will release Madden NFL 23 across multiple platforms from PS4, PS5, Xbox One, Xbox Series S/X, Google Stadia and PC on August 16 for EA Play subscribers. Before the release, EA launched and extended a closed beta to gather feedback on the pre-retail version in an effort to present the best possible launch.

One of the most anticipated changes players should expect in Madden NFL 23 is in the Franchise mode. There’s going to be an overhaul to the game’s physics engine as well as animations. Players will also notice lots of other tweaks and improvements that’ll freshen up the game for good.

Features to Expect in Madden NFL 23

EA has tuned the offensive-defensive that’ll allow them hopefully to create a more realistic situation for quarterbacks who were often running for their digital lives during the beta. Also, there has been some tuning to reduce the number of fumbles. Four bullet-pointed fixes have been implemented to address this issue.

According to the Gridiron Notes, EA has added 27 new hit-stick animations for the game’s launch which should add some needed variety for this fan-favourite portion of the game. Madden Ultimate Team has a new feature called Field Pass, which provides a clear path to progression in the mode.

“You’ll be able to see all the levels, rewards, and plenty of objectives to complete to make progress on every Field Pass,” EA said. “In Season 1, there will be multiple Field Passes available. Players can earn all of these rewards just by playing the game with no additional cost to access the Field Pass.”

Madden NFL 23 will release worldwide on all supported platforms as aforementioned on August 19, 2022.

Will Madden 23 be on EA Play? – Answered