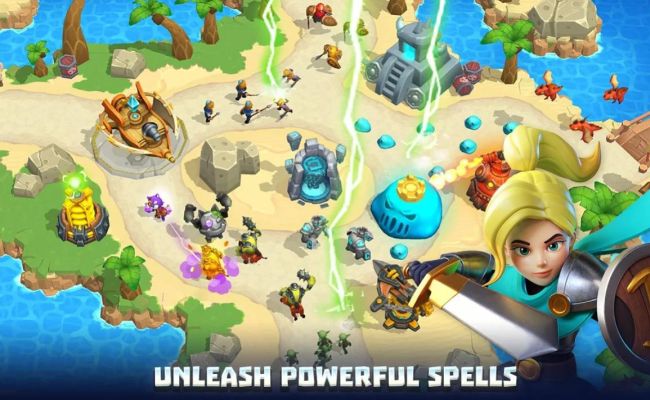 In today’s article we are going to cover all of the Wild Sky tips and cheats to help you pass more stages and defeat more waves of enemies.

This is a super fun tower defense type of game which will challenge your strategic thinking and make you take various decisions regarding the levels. Since there are quite a lot of things to consider when playing, you will have to think of everything – but you are not alone!

I am here to tell you everything that you need to know about Wild Sky, so let’s not waste another second and dive right into the Wild Sky tips and tricks right here below and tell you how you can easily pass more stages and how to upgrade the towers!

Some of the very basic stuff that you need to know in the game are the ones which you will use throughout the entire game. Now I suggest that you try and remember all of them, because they will make quite a big difference and let you advance a lot. Let me explain a little about each and every one of them:

Positioning the towers plays quite a big impact in the game, because they will attack enemies only within a certain range, so if you are for example putting melee and single target towers early on, it might not be such a great thing after all.

The best way you can place the towers is, in my opinion, something like this:

– Always try to have some AoE towers close to the spawn area of the enemies. That will help you reduce their numbers by the time they reach your base, because most often than not, the weaker enemies will die from the AoE alone.

– Place the towers in the key areas. Try to put them between two or more roads, because they will affect enemies on more lanes than one. The best is to put towers in the crossroads, and and if necessary you can put them next to the end of a lane too (or in other smaller crossroads).

Upgrading the towers will have also a very big impact on the game, and they will be able to be upgraded several times. First couple of upgrades for each tower will only increase its level, but after that it will also be able to receive ability upgrades.

I suggest that you focus on maxing out the towers which are AoE first, because those will drastically reduce the number of enemies passing through. After that, if you have some extra Coins left, you can either build new towers or upgrade the other ones. In my opinion it is the best if you upgrade the AoE towers to maximum, then focus on the rest because they will also affect more enemies, which give you coins when they die.

Know the strengths and weaknesses of the enemies

The enemies will have different elements which you can use to deal more damage to the enemies. When you use an element which counters the enemy, it will deal 100% more damage, as follows:

– Blue is strong against Red, and is weak against Green.

– Red is strong against Green, and is weak against Blue.

– Green is strong against Blue, and is weak against Red.

– Yellow and Purple counter each other.

I suggest that you always try to use the element which counters the enemy’s, because it will make things a lot easier for you if you want to take them down fast.

Double your check in rewards

Every single day you will be able to claim some extra rewards for simply logging in to the game. I suggest that you claim them daily, and claim them double too! While you are in the game’s main interface you can see in the top side of the screen a Check In icon which will let you perform your daily check in.

Head on there, and daily you’ll get some rewards which are super useful. In some of the days (the days where the reward has a small icon in the upper corner) you can choose to watch a short advertisement to double these rewards.

Always watch an advertisement when you are about to claim the rewards which give stuff such as Gems and Coins, because they are going to be super useful! So even if you won’t claim the Medals or the Rune Shards or such, just make sure that the Gems and Coins are always doubled when you receive them (especially as a f2p player).

When you pass the stages you will unlock more cards, which can then be upgraded into more powerful buildings. I suggest that you always level up a building when you have enough Tower Crystals, Hero Crystals and then Promote it.

Level up the buildings

When you head on to the Cards menu, then select the building which you want upgraded, you will notice in the left bottom left under the building’s icon, the Level Up icon. Tap on that to upgrade your building’s level, which requires Tower Crystals.

Make sure that you upgrade the buildings which you are using the most (in my case, the Cannon Tower and the Tesla Tower), because the Tower Crystals will run out faster than you will notice!

The buildings can be leveled up only up to a certain level for their promotion level, and if you want to level them up higher, you’ll need to promote them. Each of the buildings will require different materials to be upgraded, and you can check them out in the Promote Tab.

I suggest that you first promote the towers which you use the most, because there will be quite a lot of items which you will be required to have to make the upgrades. So focus on the most used towers!

If you have a lot of Coins, you can choose to spend them to upgrade the towers’ skills. Head on to the Skills menu and there you will be able to upgrade their skills by spending Skill Points and Coins.

Skill points refill over time: 1 Skill Point will refill in 10 minutes, so I suggest that you spend them whenever they refill. Try to first skill up the towers which you use the most, and then skill up the others.

You can refill Skill Points with Gems (I don’t recommend): It will cost 50 Gems to instantly refill 10 Skill Points, but I suggest that you don’t spend them on refilling them, since they can be refilled for free.

Complete your Daily Quests and Achievements

Every single day you will have a list of quests which you can complete, so I definitely suggest that you do them every single day because they will reward you with EXP and Gems, as well as Coins and other useful stuff to make upgrades.

Daily Quests will refresh every day, and the Achievements can be completed only once. Try to give them a quick read and complete them whenever you can, because the rewards from the Achievements are slightly better than from the daily quests as they are a bit more difficult to complete.

Free Chest: The Free Chest can be claimed every 4 hours, and I suggest that you claim it every day several times as it can give you Coins, Tower Crystals, Hero Crystals or other useful items.

Hero Chest: This chest will give you guaranteed several Medals of Courage, as well as a chance to give you some Hero shards. You can purchase this for 100 Gems, but I recommend to not spend them early on this.

Spell Chest: This chest will give you guaranteed, just like the Hero Chest, some Medals of Power, as well as a chance to give you Spell Shards. It can also be bought for 100 Gems, but don’t buy it early on in the game.

Tower Chest: This is exactly like the other two chests (Hero Chest and Spell Chest), except it is for heroes.

Premium Chest: This chest will give you hero and tower shards, and in the first 10 draws you will receive guaranteed at least some Rex Shards or Howling Blast Shards. Purchasing one Premium Chest costs 300 Gems, and if you choose to purchase 10 in a bundle, it will cost 2700 Gems.

I suggest that you save up Gems to spend them on the 10x Premium Chests because of the first 10 draws bonus. This will let you save up 300 Gems and basically you are paying for 9 and getting 1 for free.

Check out the goods in the Market

In the Market you will be able to purchase various goods, which can be used to upgrade towers and heroes. I suggest that you check the offers out every single day, because they are time limited and the offers usually refresh every several hours.

I suggest that you spend the Gems only on the items which are rare, and not on Coins and various Crystals which can be received very easily.