Home Guides Who is Agatha Harkness in Marvel Strike Force 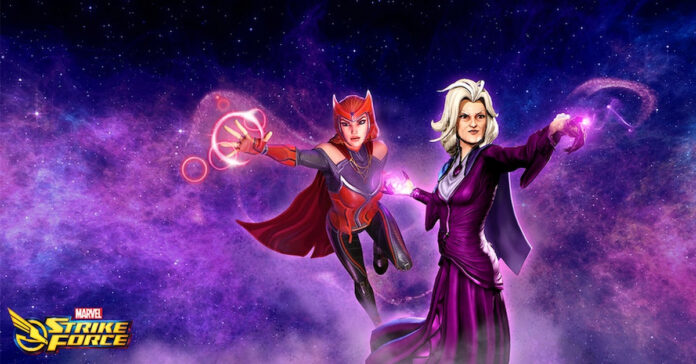 Marvel Strike Force is a fascinating mobile game that allows you take control of earth’s mightiest heroes and put them up against some of the most fearsome villains in the Marvel universe.

The game will see you face various villains such as Thanos, M.O.D.O.K, Loki, and even Agatha Harkness. So in this article we’ll be concentrating on the latter villain and telling you just who Agatha Harkness is in Marvel Strike Force.

Who is Agatha Harkness in Marvel Strike Force?

Born centuries ago, Agatha Harkness is an old witch who settled in the English colony of Salem, Massachusetts. There she formed her own coven of witches, hoping to freely practice magic in the New World.

Soon after, Agatha and her group were eventually driven out of Salem following the Salem Witch Trials and they settled in the town of New Salem, a secret magical community in what would eventually be known as Colorado.

Agatha Harkness is one of Earth’s most powerful witches and through the years has often served as a tutor to humans and mutants endowed with magic or great power, including Franklin Richards (the son of Reed and Sue Richards) and the insanely powerful Scarlet Witch.

Agatha has the ability to tap the universe’s infinite store of ambient magical energy and manipulate it to a variety of effects. Through magical spells and phrases, Agatha can control the elements, project energy, manipulate dimensions, fly, and create force fields, just to name a few. She’s assisted Doctor Strange, Scarlet Witch, and other protectors of the Darkhold in assaults against Morgan Le Fay and some of Earth’s greatest mystic threats.

Who is Agatha Harkness in Marvel Strike Force