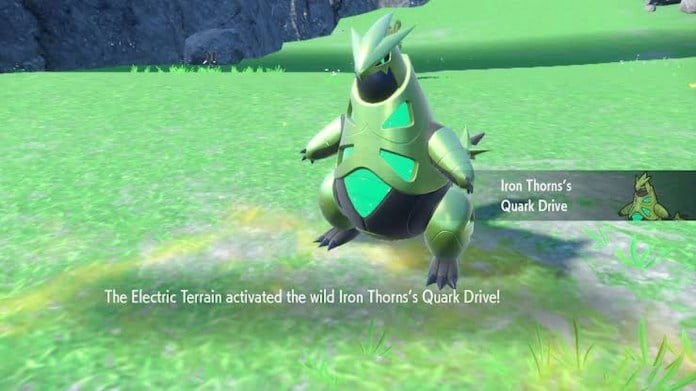 Pokémon Scarlet and Violet was launched in late 2022 and didn’t take long to become one of the most popular games in the Pokémon franchise. There are lots of things to do in the game and like many other games before it, there are lots of Pokémon to catch.

The Iron Thorns is a unique Pokémon that isn’t very easy to come by and if you’ve ever gazed at Tyranitar and thought of how cool it would be to see a Godzilla-like Pokémon become Mecha Godzilla, then stick with us as in this article we’ll be showing you where to catch Iron Thorns in Pokémon Scarlet and Violet.

Where to Catch Iron Thorns in Pokémon Scarlet And Violet

Although it’s a version that’s exclusive to the opposite game you can capture Larvitar, the Iron Thorns Pokémon is strictly a post-game encounter in Pokémon Scarlet and Violet.

So to find it, you’ll have to enter The Great Crater of Paldea that’s also known as Area Zero. There you’ll find Iron Thorns roaming about the mountain slopes. And although it may take a while for even one of them to spawn, you’re very likely to encounter multiple of them since it’s not exactly a static Pokémon.

Upon reaching the first Research Base, you’ll come across a specific slope that should take you right up toward the spot where Iron Thorns are very likely to appear. However, you’ll have to find a way to trade Iron Thorns if you want to use them earlier in the game.

Paradox Pokémon are an entirely different species of Pokémon if you’re playing the Violet version of the game, the Iron Thorns are very likely to be your primary target Pokémon.

Iron Thorns is a Rock/Electric-type Pokémon with “similarities to a Pokémon introduced in a dubious magazine as a Tyranitar from 1 billion years into the future.” Despite its aggressive definition, it is still a powerful Pokémon that many players want to get their hands on as soon as possible.

Where to Catch Iron Thorns in Pokémon Scarlet And Violet