Home News When is Payday: Crime War Coming Out?

Once upon a time, back in the June of 2015, the mobile game entry of the Payday game series, Payday: Crime War, was announced. Fast forward to today, and the game is being enjoyed by millions of– Sike! You thought!

It’s 2021 and the game has not been released yet. Bummer, right? Well, we’re disappointed too.

After the announcement back in 2015, there was radio silence about the game until a year later in 2016’s E3, that unlike the other titles in the Payday franchise, Crime War would not follow the same ‘co-operative heist’ formula. Instead, it would be a 4v4 first-person shooter where teams of heisters would face off against team of cops, with a bit of the usual Payday game elements found throughout.

It would only be a year later (once more) when we got a look at Payday: Crime War with a gameplay trailer that promised towards the end that the game would be “out soon”.

Then, as you may have expected, disappointments ensued. In September 2018, the closed beta rolled out, following which in the November of 2019, the soft-launched version of the game was going to be shut down, giving the hope to fans that the game would return with a new publisher someday soon.

PayDay: War Crime kept being bounced between various studios like Cmune, Badfly Interactive and NBC Universal, which could be the reason that it was delayed so much, and ultimately, was cancelled.

Now, with PopReach heading the project of finishing the game, the developers are hoping to soft launch the beta version of the game by the end of 2021, and are planning for a global launch during the first half of 2022.

Needless to say, it’s time for Payday enthusiasts to get hyped (but not too much. We know history repeats itself)! 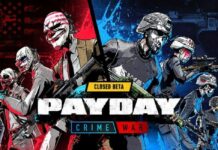