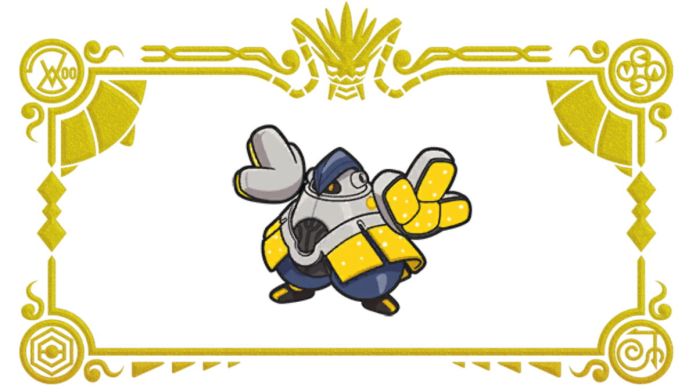 Iron Hands is a dual-type Fighting and Electric Pokémon, who resembles a robotic version of Hariyama. Iron Hands can be found in Area Zero alongside the other Paradox Pokémon in Pokémon Violet only—Pokémon Scarlet Trainers will need to trade for it.

As one can expect from a Fighting type Pokémon, Iron Hands’ attack and HP stats are very high, and it learns nothing but physical attacks and no special moves. It learns a variety of Normal, Fighting, and Electric attacks, including moves like Thunder Punch, Close Combat, and more.

Iron Hands learns the valuable move Belly Drum at level 84. Belly Drum, when used, cuts the user’s current HP in half, but maxes out their attack boost until they’re switched out or knocked out.

Belly Drum is a popular move in high-level play thanks to its ability to potentially decimate teams if the user is allowed to get it off. When Belly Drum is paired with a Pokémon possessing naturally high base attack, they become almost unstoppable!

Belly Drum’s potent power is the entire reason why Iron Hands learns it so late. First off, you’ll need to catch an Iron Hands for yourself, then you’re going to have to train it up until it reaches a high enough level to learn Belly Drum.

We hope that answers your questions about when does Iron Hands learn Belly Drum. If you have any other questions or tips about Pokémon Scarlet & Violet, let us know in the comments below!