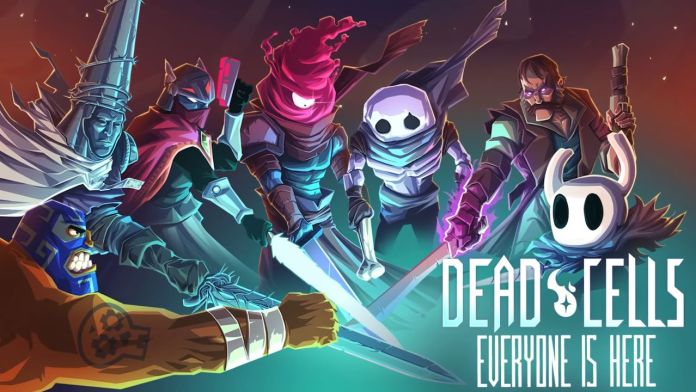 Dead Cells has been going strong for a good while, thanks to the many updates that developer Motion Twin put out that added new content to the game.

While it seemed like major updates for this amazing mix between Metroidvania and roguelike games slowed down, Motion Twin surprised many fans of the game by announcing the “Everyone is Here” update, the most anticipated crossover event in video games since the release of Super Smash Bros. Ultimate.

The update is now live on Nintendo Switch as well as on all the other consoles. Here’s what’s new in it.

What’s New in Dead Cells “Everyone is Here” Update?

The “Everyone is Here” update doesn’t introduce any new biome or powerful enemy, but it still comes packed with great new content in the form of new weapons and outfits inspired by some of the most popular indie games released in recent years such as Hollow Knight, Guacamelee, Hyper Light Drifter, Skul, Blasphemous and Curse of the Dead Gods. To get the new weapons and outfits, you will have to check out the new, unusual rooms that have appeared in the Prisoners’ Quarters.

The new weapon inspired by Blasphemous included in the update is the Face Flask, a rather unique weapon that doesn’t seem to work too well. The new outfit inspired by the game is the Penitent’s Outfit.

Curse of the Dead Gods

The new Curse of the Dead Gods-inspired weapon is the Machete and Pistol, a very interesting weapon that combines short and long-range capabilities. The new outfit is the Explorer’s Outfit.

It’s time to become a chicken and show the Pollo Power with the new weapon inspired by Guacamelee. Did you know that chickens can lay eggs as powerful as bombs? Now you do! The new outfit inspired by the game is the Luchador’s Outfit.

The Pure Nail weapon inspired by Hollow Knight will strike fear into the hearts of all Dead Cells’ enemies. The new outfit is the Vessel’s Outfit.

The new weapon inspired by Hyper Light Drifter is the Hard Light Sword / Hard Light Gun, a weapon that lets you mark enemies and then strike them to get ammo back. The new outfit is The Magician’s Outfit.

The new Skul-inspired weapon is the Bone, a simple yet deadly weapon that will show your enemies why bone is among the strongest materials in nature. The new outfit is the Little Bone’s Outfit.

The Everyone is Here update also includes some balance and quality of life changes. You can learn more about them by heading over the game’s official website.

What’s New In Dead Cells “Everyone is Here” Update?