Home Guides What the Fight Game Tips, Cheats and Guide to Keep Winning 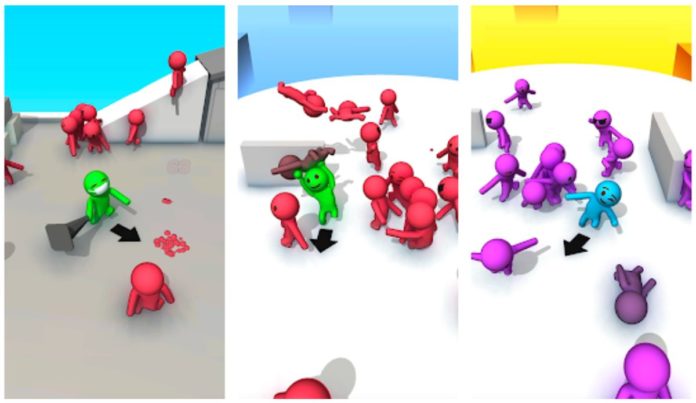 Voodoo has launched a brand new and exciting mobile game, What the Fight. Just like all their games, this is a fast paced romp with hilarious moments and a relatively low level of challenge. But you will love playing it – that’s a fact.

And even though you’re probably doing OK yourself, we’re here to help you do great instead. For this, we’re sharing a bunch of What the Fight tips and cheats in a complete guide that will help you win all your battles easily.

So if you want to play a better game, check out Touch Tap Play’s guide for What the Fight below!

OK, so you ran towards that traffic pole, grabbed it with your clumsy little jelly hands… now what? Now it’s time to start spinning!

Really, the only way to deal a lot of damage around you when you have a melee weapon equipped is to get close to the opponents and start spinning in order to smack the health out of them like there’s no tomorrow.

Otherwise, your character won’t do that much. It’s not like you have an attack button – leave gravity (or better said, inertia) work its magic and spin fast in order to hit your enemies and be the last one standing.

Have in mind that your character (as well as the enemies) can fall or be thrown away from the battlefield, which results in a restart with a massive health loss. Try to be the one throwing people over board and not the other way around.

Each time you play, there will be a weapon hidden somewhere within the level. Make sure to get there first, as it can mean the difference between an easy win and an embarrassing loss.

These weapons are usually placed in harder to get areas, so you will risk a bit getting there. But don’t let a potential fall prevent you from trying. In most cases, if you manage to get that weapon, you will win the fight.

The strategy changes a bit once weapons are involved. Spinning like crazy with a pistol equipped – or with a crossbow for example – won’t deliver the same great rewards. In this case, you will have to do a bit of aiming.

With long ranged weapons, you’re best if you manage to keep the distance. Aiming is not easy, but simply try to rotate your character towards the enemy. Eventually, you will hit them. Multiple times. And win.

If the special weapon is a melee one, then things are even better – you can keep spinning as you did before or simply push as much as possible into your opponent until they have no place to go.

It’s OK to let the opponent have their own fight

While definitely not as fun as being out there in the heat of the battle, it gets the job done and sometimes this is all what matters.

The thing is that fortunately, the AI is not focused on destroying you alone – the opponents can get into a brawl of their own and completely ignore you. This means that they make the job of you taking them out a lot easier.

Let them have their thing until their health goes really low and jump in to deal the final punch. Or shot, or wooden board… whatever. Or simply wait until one is destoryed by the AI and just move in to collect the gold they dropped.

All is fair and sound in What the Fight for mobile!

All that money you collect from fallen enemies can be put to good use, to make you stronger.

I’m saying that literally, because at the moment of writing this guide, you can only invest in increasing your Character’s strength. But increasing their health is coming soon, so you will have more options.

Sure, you can invest in getting more coins when you are away from the game – and you should do that as well, but focus on increasing your character’s strength because you want them to deal as much damage as possible.

Watch ads to get free upgrades and money

Like in most free to play mobile games out there, you can watch ads for various goodies in What the Fight also.

For example, you can watch a video ad to get 5 times more gold at the end of a battle or watch one to increase one of your stats for free. The choice is yours.

The thing with ads is that you’re going to get them anyway (unless you apply the trick below). So it’s best to put them to good use and get something out of them instead – so do watch those ads and ennoy the benefits.

How to prevent ads from ever showing again

Of course, you probably don’t like ads. Nobody does, but it is what pays the bills for the developers of the game and puts food on the table.

The best way to stop ads from ever bothering you again is to purchase the No Ads IAP from the menu (simply tap the top left icon to see it). That will really show your support and encouragement to the developers.

But at the same time, you might be in a really tight spot now. If you really can’t afford the IAP and you also don’t want to say “thanks” for the game and support the devs, you can turn off the ads by turning off your internet connection.

Simply force quit the game and either disable both your WiFI and Mobile internet or put your phone in airplane mode. Next time you start the game, ads will no longer bother you – but at the same time you won’t be able to get the benefits from them.

What to do about ad-only upgrades you can buy?

The game will try to force you to watch an ad by making the upgrades you can buy ad-only. However, that is not permanent and there is a way to walk around this as well.

If the game switches to ad-only upgrades and you want to spend money instead, simply force quit the game and relaunch it. When you do so, the option to watch an ad for an upgrade disappears and you can buy it with regular gold.

These would be all our What the Fight tips and tricks for Voodoo’s mobile game. If you have additional strategies that work well, don’t hesitate to let us all know by commenting below.