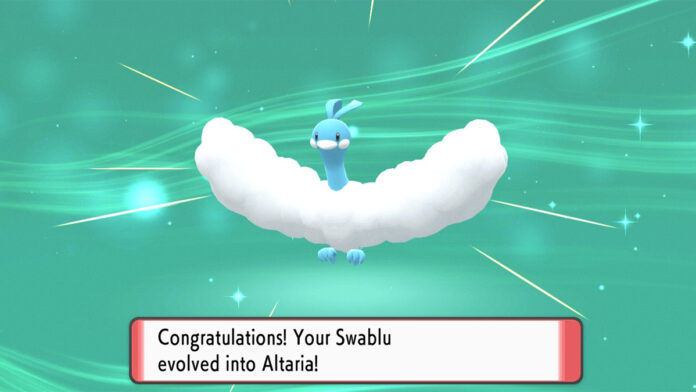 Are you wondering how high you have to level Swablu to evolve it into Altaria in Pokemon Brilliant Diamond and Shining Pearl? You’ve come to the right place! While it starts out as a humble normal/flying type bird Pokemon, Swablu actually evolves into a dragon/flying type, featuring one of the rarest typings in the game! So, how much do you have to level a Swablu to get it to evolve?

Swablu evolves into Altaria starting at level 35. This is actually a pretty short grind considering that you most likely won’t see Altaria until relatively late in the game. In fact, if you found a Swablu on Route 211 using the Pokeradar, you can evolve it after as few as 7 levels.

That said, if you want a Swablu early on, you’re actually better off searching in the Grand Underground; this is because the Pokeradar can’t be obtained until after you beat the Elite Four, whereas you can access the Grand Underground as early as Eterna City. Specifically, Swablu spawns in the Spacious Cave, Whiteout Cave, Fountainspring Cave, Icy Cave and Glacial Cavern biomes.

During your first ventures into the Grand Underground you can find Swablu as low as level 16, but later on, you can even find ones that will evolve after leveling up a single time!

So When Does Swablu Evolve?

The earliest level that a Swablu will evolve into an Altaria is level 35. If search for one late in the game in the Grand Underground, any Swablu that you catch will be above this level and will evolve after leveling up a single time! That’s all there is to it!

What Level Does Swablu Evolve in Pokemon Brilliant Diamond and Shining Pearl? – Answered