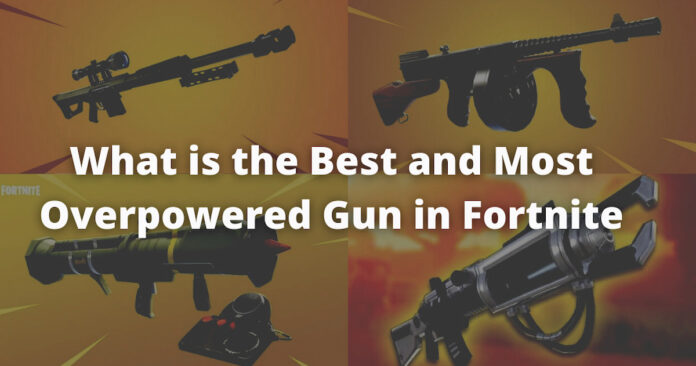 Epic Games has released some pretty incredible weapons in its acclaimed Fortnite battle royale game in the past and continues to do so. From slightly powered to overpowered weapons, we’ve gotten our hands on varieties of guns in the game.

And while the guns in Fortnite are undoubtedly iconic, some of them are too good in such that they almost guarantee victory in every battle royale match. Then there are others that remain unwanted even if they’re given out for free.

It’s quite the challenge to decide just which weapon is the best in the game, but in this article, we’ll be revealing the best and most overpowered gun in Fortnite.

What is the Best and Most Overpowered Gun in Fortnite?

In the last couple of years, ever since the game launched, dozens of Fortnite weapons have been overpowered. This is in such that if a player gets a hold of any of them, then it’s basically game over for any opposing player they come across.

So there you have it from us on the best and most overpowered gun in Fortnite. As mentioned above, it’s hard to pick a single weapon from all of the game’s vast weapon collection. Do let us know which amongst the best guns is your most powerful.

What is the Best and Most Overpowered Gun in Fortnite