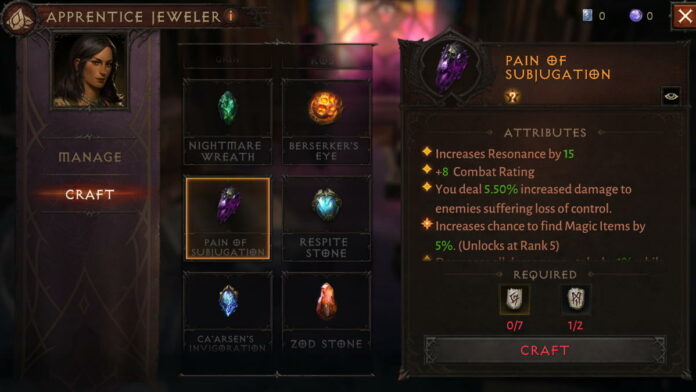 If you’re familiar with RPGs or MOBAs, you may have heard the term “crowd control” at some point. Basically, any ability that is referred to as a crowd control ability means that it’s a good ability at stunning or slowing enemies, like controlling a crowd. Crowd control skills in Diablo Immortal take away control from enemies, which is what the phrase “loss of control” refers to.

In Diablo Immortal, most classes have a few skills that are considered to be crowd control skills—you can tell if they’re marked with the purple control tag. Control skills focus on disabling or hindering enemies in some fashion, whether it’s slowing them down, stunning them in place, or fearing them to make them escape.

If you’ve looked up this guide, chances are that you got a Legendary Gem like the Chip of Stone Flesh or Pain of Subjugation, or you found magic gear that has some sort of loss of control effect. Both of these Legendary Gems are more effective when you’re attacking enemies that are suffering from loss of control.

Although the distinctions are still a little unclear for some skills, just assume that being slowed or stunned in any way is considered a loss of control. There hasn’t been quite enough testing yet, but since Diablo Immortal takes so much from Diablo III, this is what most players are going with.

Creating a build around these Legendary Gems might be a good choice for classes that focus a lot on loss of control. Just keep in mind that most bosses in the game are immune to most forms of crowd control, so you’ll have to switch it up when you’re facing them.

We hope we helped you understand what “loss of control” is in Diablo Immortal. If you have any other questions about loss of control, please ask away in the comments below!

What is Diablo Immortal Loss of Control? – Answered