Home Guides What is an Oden in COD Mobile? – Answered 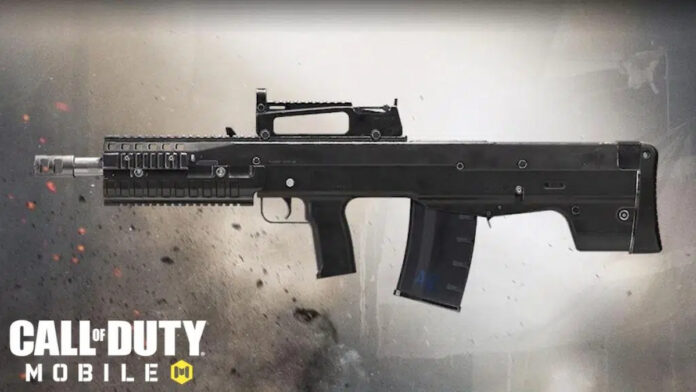 There are lots of weapon varieties in Call of Duty Mobile that it can be very difficult to keep tabs on all of them, not to mention the dozens of attachment that comes with every weapon.

New guns are always making their way to Call of Duty Mobile and in this article, we’ll be guiding you on a very special weapon named Oden in COD Mobile.

What is an Oden in COD Mobile? – Answered

And in multiplayer, the Oden can be unlocked in Create-a-Class after reaching rank 28. It’s a fully-automatic assault rifle that has very high damage for its class. The Oden can take out enemies in just 2 shots out to 40 meters if at least 1 shot hits the enemy’s head or cheat.

The Oden’s chest damage for multiplayer is slightly higher than the FAL, which is considered the strongest assault rifle in Call of Duty. Even from a long-range, the Oden will only need 3 shots to kill and if you’re playing hardcore, the gun will be a 1-shot kill from all ranges.

The Oden’s high damage comes with a low fire rate of 435RPM, the slowest of any assault rifles in Call of Duty. The weapon will take out an enemy quickly in 2-3 shots but missing shots is more punishing than with most other weapons of a similar class.

Compared to the FAL, the Oden can fire in full auto but possesses slower handling characteristics. It has the slowest ADS of any unmodified assault rifle and is only slightly faster than some LMGs. The Oden’s reload speed is also somewhat slow and the 20-round magazine can be depleted often if fired too recklessly.

The Oden was an incredibly unique gun in Modern Warfare although it wasn’t for everyone. The weapon’s notorious slow-firing characteristic is also present in Call of Duty Mobile as well, forcing some players to pass on it.

Despite its slow firing rate, the Oden is a powerful Assault Rifle that shouldn’t be underestimated. As described by the developers, the Oden “is perfect for defending objectives and covering teammates rushing into the thick of battle.”

If you want to hold down lanes with ease, then look no further than utilizing the Oden’s damage output.

What is an Oden in COD Mobile? – Answered