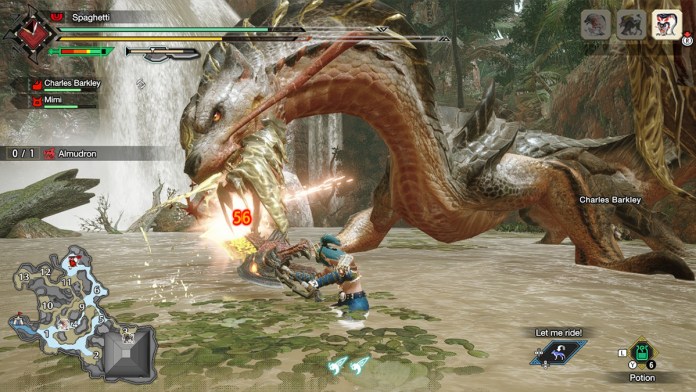 As one of Monster Hunter Rise’s new additions to the series’ menagerie of monsters, Almudron is an unfamiliar foe even to Monster Hunter veterans. With a key part of gameplay in Rise entailing choosing the correct equipment to counter the monster that you’re fighting, it’s only natural to wonder what Almudron is weak to. Luckily, we’ve got the answers!

What Elements are Almudron Weak to?

As with all monsters, Almudron doesn’t have a singular weakness so much as it has a sliding scale of effectiveness for each element. That said, overall, you’re probably best off sticking to fire element attacks.

While it only ties with the effectiveness of ice when attacking the head and hind legs of an Almudron, fire pulls ahead while attacking the forelegs, abdomen, back and all parts of the tail.

Thunder and dragon fall quite a bit behind these two and water element weapons should be avoided altogether.

In terms of weapon type, all three categories are fairly even. Impact damage is most effective on the head or abdomen and cutting damage is best against any part of the tail, but overall you should probably just stick with whatever weapon you’re most proficient with and attack any vulnerable part within reach.

As discussed above, Almudron is most weak to fire damage. Ice is another decent contender if you don’t have a good fire set. All weapon damage archetypes are pretty close in effectiveness, though you’ll see some variance depending on where you’re hitting it.

That’s all there is to know about exploiting Almudron’s weaknesses!

What is Almudron’s Weakness in Monster Hunter Rise? – Answered