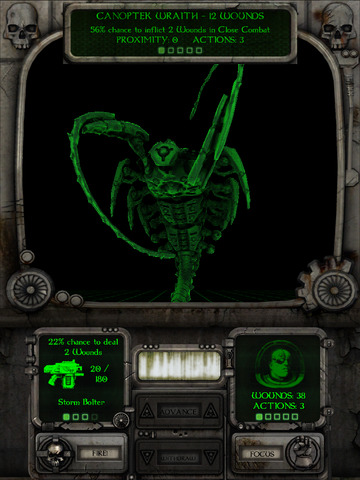 Tin Man Games is a team that fans of gamebooks should know well, as it developed some of the best games of the genre. Today a new game from the team has been made available, a game that fans of both Tin Man Games and Warhammer 40.000 will surely enjoy.

The new game from the team is called Legacy of Dorn: Herald of Oblivion and it’s the digital adaptation of the Warhammer 40,000 book with the same name. In the game, players take control of a veteran Space Marine, last survivor of a squad that’s been decimated by aliens. During the course of the game players will have to explore several different locations and take down any alien they encounter.

While the game isn’t all that different from other gamebooks, Legacy of Dorn: Herald of Oblivion manages to stand out from the competition thanks to some unique features which enhance immersion so if you’re a die-hard Warhammer 40,000 fan, you’ll find plenty to like in the game.

Legacy of Dorn: Herald of Oblivion is now available in all regions on the App Store. The game is the first one of a trilogy and the other two games will be released sometime next year. We will keep you updated on them as soon as more comes in so stay tuned for all the latest news.