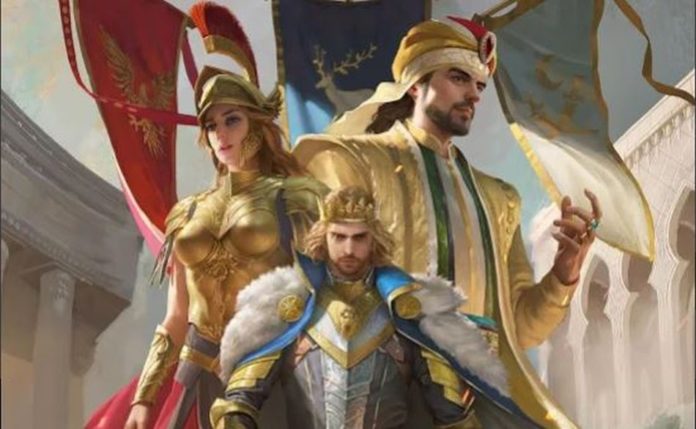 If you want to become a pro player, our War Eternal tips and cheat below will help you unlock all heroes and build an insanely power empire – as well as generally play a better game.

You will have to manage a lot of buildings and structures, so it is important that you know how to do them so you don’t waste time and get more powerful quickly. With all of this in mind you can also recruit powerful lords and warriors to aid you, and I m going to tell you everything that you need to know in order to get stronger, get a bigger army and get the most out of the game.

So, without further ado, let’s dive right into the War Eternal Epic Kingdoms tips and tricks to guide you in creating a strong empire.

The main quest line can be found in the bottom left side of the screen. Here you will see quite a few quests and you can tap on them to quickly be taken to their completion objective.

These quests will give you plenty of good rewards, which will be super useful at the beginning. Later on they will also be good, but don’t rush with the quests. So what I suggest that you do is this:

– Follow the quests until you upgrade Palace to level 5.

– After upgrading the other buildings, focus on the Palace again and upgrade it to level 7. After that, upgrade the Academy and start Researching.

These would be the main steps that you should take in the game from the early stages. Also, keep on making the upgrades to the city buildings as much as you can, to always keep them maxed out for the current Palace level.

While we do believe that going the long route and upgrading everything before leveling up your Palace, some of the buildings in your empire don’t really benefit you a lot from their higher level.

So instead, focus on leveling up the Palace as much as possible as fast as possible and only upgrade the buildings that are directly related to war (and those required to upgrade the Palace, of course). This way you will be able to progress faster and focus on the lower tier buildings later.

If you want to quickly advance in the game, you will need to spend some time. You should also hire an extra helping hand to the builders, the Builder’s Brothers.

This will give you an extra “hammer” which means that you can build or upgrade two structures at the same time.

Some people don’t like using this early on, because later you might want to use the extra help for the more time consuming buildings, but I personally prefer speeding it all up as much as possible from the very start. You can use any and every advantage you can get!

This feature is extremely important to the game, because being in an active Order (Alliance) you will gain access to some protection, rewards and also help building the structures faster.

I suggest that you always help the other members when you see the hands on the bottom right side of the screen because they will also send help back your way. This is super important because they will speed up your construction time by a lot.

Take your time and find a good Order because if you join one with a lot of active people, you will definitely see a big difference. Also, don’t forget that once you found “the one” (alliance) you can also place your camp around it for a safer environment.

Head on to the Order tab and there you will open the alliance tab. Tap on the “Territory” tab and hit the middle button with an arrow, Proceed. That will take you to where your guild is in the world map. Tap an empty patch of ground around it and then select Migrate.

You will then be able to move your territory within the marked area to be offered protection from the guild you just joined. Find an available patch and Migrate there!

If the alliance you have joined proves to be not exactly what you were expecting, or if its members go AWOL or play less often, don’t let your heart keep you there longer than needed: search for a new alliance, one that is active and can benefit your game.

Tap the little humans with exclamation marks in the city

Within the city walls you will see quite a few humans having yellow exclamation marks above their heads. These humans can give you goodies if you tap on them. Cavalry, Archers and so on. Do it if you want to get free goodies to boost you!

Use speed ups until you can upgrade free

This will help you upgrade the buildings by quite a lot and you should focus on using the speed ups mostly on the Palace and other buildings that are super important when it comes to what you have to upgrade.

For example, I prefer to use the speed ups for Academy and Palace the most, because I like researching and upgrading the talents.

Use the speed ups wisely though, and not at the very early stages of the game because if you joined an Order then just from the help alone you will finish the upgrades really quickly.

Use these speed ups later on when it will take quite a few hours and you want to speed up the process to make further upgrades.

If you are starting a Palace upgrade (which can take quite a lot of hours) you should focus on doing other stuff in the game and start up the upgrade before you go to bed, and that way it will be finished by the morning – at least during the early levels.

That way you won’t have to use any of the speed ups! Also, when you want to use them try to calculate in such a way that you don’t cover all of the upgrade time, but leave the last 5 minutes out because those you can upgrade for free.

But remember that hoarding speed-ups is not necessarily a great strategy as you might benefit more from them early on. As building times increase as you progress through the game, the actual value of a 5-minute speed-up lowers.

So take advantage of them early on, keeping in mind that leveling up your structures as fast as possible is what gives you the upper hand in the game and opens up a ton of possibilities.

Attack the adversaries outside your walls

Right outside of the city you will be able to see several mercenaries which you can attack to gain Lord Exp, gold and other resources. They are useful if you want to gain some extra exp, no matter how little!

Get the most out of Heroes

The generals of your troops, Heroes are extremely important in the game and choosing to focus on developing the correct ones for your armies and for your purpose can save you a lot of headaches.

Each hero has a specific set of skills and abilities and enjoys to command specific troops from your kingdom. This means that some are more suitable for PvP battles, PvE battles (against mobs on the map) or for resource production.

You should plan your approach to Heroes as much and as good as possible, since you always need to have your best heroes maxed out and ready for the job they are intended to do. Also take into account the Bods that Heroes have, as they give further boosts depending on the situation.

Although we all start playing the same civilization, later on you might want to specialize and choose one of the other civs available in the game. Each civilization has its own strengths and weaknesses, offering a different skill tree, different units and skills.

You should choose the civilization based on your style of play, as one is better suited for peaceful kingdoms that want to focus on resource production (Aegeans), resource gathering on the world map (Kingdoms of the Fertile Crescent) or battles, for example (Kingdoms of Middle Ages).

Each Civilization is also focused on a specific type of unit (eg. infantry, archers etc) so have that in mind for your end goal.

In our opinion, the best choice for the regular player is a civilization that boosts resource gathering, while somebody who wants to fight other players constantly (you need a solid alliance for this though), choosing a more offensive-based civilization is the way to go.

These would be all of our War Eternal: Epic Kingdoms tips and tricks to help you build a powerful kingdom. Do you have some more useful tips and suggestions to help the other players? Share them with us down in the comments section below!