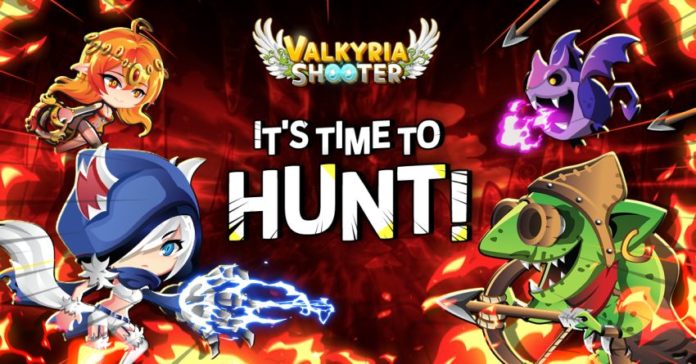 If you’ve played a mobile RPG before, you’ve already got the general gist of Valkyria Shooter in terms of levelling up and summoning heroes and all that jazz.

What you probably haven’t come across before is the game’s action sequences, which combine elements of the cookie clicker, RPG, and auto-runner genres to create a novel and challenging gameplay experience.

The game’s app store description contains the phrase, “Escaping & Shooting Action”, which is about right.

Before we delve into that, however, here’s a general overview.

Valkyria Shooter is set in a sort of Norse mythology-inflected fantasy world in which Ymir’s heart has gone missing, and you have to find it.

You take on the role of Freya, a Norse goddess, and her five Valkyria. Throughout the game’s 1000 or more levels you’ll play in six dungeons, summon 25 servants, find 27 pieces of artifact, and compete with other players from around the world.

Got all that? Good. Now let’s get on with the gameplay.

How to play Valkyria Shooter

The action sequences in Valkyria Shooter see you automatically running from right to left across the screen, with all manner of terrifying fantasy monsters in hot pursuit.

You have a range of commands at your disposal, including a jump button, a sprint button, a heal button, and skill buttons corresponding in number with the number of Valkyries you have in your party. All but the jump button are on timers.

The sprint button lets you sprint away from the monsters, buying you a valuable bit of time. The skill buttons, meanwhile, unleash powerful attacks.

On top of all that, you can attack the monsters that are pursuing you by tapping them vigorously. It’s a lot to juggle.

The trick with these sections is to be flexible. Sometimes it’s enough to just keep tapping the monsters as they arrive on the screen, but you’ll need to evade more powerful monsters, using sprint to give yourself some breathing room. While it’s rarely possible to dodge melee attacks from big monsters, you can dodge projectiles by jumping or double-jumping. You also need to jump to collect potions.

Your Valkyries are basically your lives. Each one has its own special skill attack and servant – a floating creature that adds to your firepower. When a Valkyrie dies, you’re one step closer to game over, and you lose one of your skills.

The action sequences can be tricky, since you need to flip between evasion, allowing your servant to deal with the firepower while you focus on dodging and jumping, and attack, tapping away at your enemies and hoping that none of them gets close enough to deal you a blow.

Once again, the key is flexibility.

This is the more familiar part of the game. As with any decent RPG, there’s a dazzling degree of complexity under the surface, but progress boils down to managing your basic RPG housekeeping.

You can equip an artifact to each of your Valkyrias. These bestow various advantages, such as defensive boosts, XP buffs, and so on. You can level up your artifacts with gold, and equip any artifact to any Valkyrie.

Also, you can enhance your artifacts using those that are unequipped.

You acquire new servants by summoning them, either with diamonds or special summoning gems. There are five different types of summon, three of them random (two s-b grades and one a-c grade) and two that guarantee either s-grade or a-grade servants.

Once you have a servant you can upgrade it with gold, and link it to whichever Valkyrie you like. As with artifacts, servants bestow buffs, as well as providing extra firepower. You can release servants at a cost, in exchange for gems, and you can enhance them by consuming other servants.

And servants perform another function. You can send them off on quests, which run in the background and deliver various rewards at timed intervals.

There are tons of arcane currencies and processes in Valkyria Shooter. It would take a thousand years to explain them all in depth, but suffice to say that you’ll need to keep on top of your enhancing, levelling up, smelting, and so on if you want to get anywhere.

If you’re strapped for time, we recommend jumping into the Training Base and letting your party collect some loot and XP automatically. And don’t forget to keep sending your servants on quests, and claim all the rewards you have coming your way for attendance and achievements.

Good luck! Get started with the game right now via Google Play.