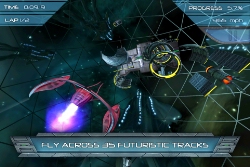 A really unique racing game is going to be released soon on the App Store, a game where racers will be pitted against the thoughest opponent ever: the clock.

AiRace Speed has been originally released on Nintendo 3DS a while back but the iOS version of the game is going to feature more content that the original release, as it will include all the extra levels from AiRace Xeno.

The gameplay experience, however, is going to be as smooth and engaging as it is on Nintendo’s portable console. Players will have to choose one between a few different futuristic vehicles and race on several different circuits. What makes AiRace Speed different from many other racing games is the fact that you will be alone on these tracks, trying to get the best time possible while avoiding obstacles and more. The presence of online leaderboards definitely gives the gameplay experience an edge, as it gives an incentive for gamers to keep improving their times.

AiRace Speed has yet to receive a release date but apparently it will be released next month. We will keep you updated on the game’s release date as soon as possible so stay tuned for all the latest updates.