If you’re wondering how to play Trials of Heroes to improve your performance and unlock more heroes, while defeating everybody else in the Arena, you’re at the right place! Our Trials of Heroes cheats and tips will guide you through everything you need to know about getting better at this game.

Trials of Heroes is an idle RPG game with amazing graphics and top mechanics. With tens of heroes to unlock and level up and a ton of areas to take part in, this is a modern and high quality alternative to other similar games available on mobile. A real joy to play!

So let’s not waste any time and instead let’s check out the Trials of Heroes tips and tricks below!

Don’t rush to discard your heroes
Yes, it is true that the game tells you early on that 1 star heroes should be destroyed instantly and turned into valuable materials and it’s true that after you reach a certain point in the game, that is indeed the case. However, early on don’t just rush to sacrifice the low star heroes!

I am saying this because you will eventually (pretty soon, actually) unlock the Tavern where you can send your heroes to complete missions for some pretty awesome rewards. But the missions will require you to have heroes of a specific race or alignment, without caring too much if it’s a one star or 5 star hero.

So until you have a varied amount of higher rarity heroes available – enough to cover for all the potential requirements in the tavern, keep on to the dead weight – they will prove useful after all!

Leave the mission that requires you to perform alchemy twice for last – you will have to spend Diamonds to do so (20 minimum), but if you complete all the daily missions, you get 100 as a reward, so you’re still getting a nice profit each day.

Team order is very important
When selecting the Heroes for your battles, randomly throwing your best ones on the map won’t just do it! Front line heroes are the ones to get more damage, from left to right.

So it’s a good idea to plan your placement a bit and position your highest health/highest defense heroes first and work it backwards in such a way that your most feeble heroes are last. This way, you will keep them all alive for longer periods of time.

Stay in Boss stages when leaving the game
Each stage you are in during auto battle has the potential to give you some specific loot. The boss stages (level 5 and level 10) are the ones that offer the best loot. Therefore, you should always leave your heroes in auto battle mode in either of the two, in order to maximize the loot you’re going to get while away from the game.

Alternately, if there’s a specific type of item that you want (let’s say a helmet) and you have a stage that rewards that to you, you can leave your heroes in that stage as well. But for most cases, planning to leave your heroes auto battle in the boss stages is the best choice.

We have the fights to start with, where all guild mates work together to destroy as many enemies as possible for the highest loot, but we also have the permanent boosts and bonuses that can be unlocked through guild donations. Finally, the higher the level of the guild, the more goodies are open and more ways for you to get better!

Heroes under 4 stars are useless in battle
Even though early on you will have to keep lower level heroes for Tavern mission purposes, eventually you will start throwing them into the abyss because they are indeed useless.

I would go as far as saying that any hero beyond 4 stars is pretty much useless in battle and you are better off using any 4-star hero instead of a 3-star one.

So always work on your best available heroes: your goal is to have a team of 5-star heroes only, so don’t invest valuable resources in those that are too common! 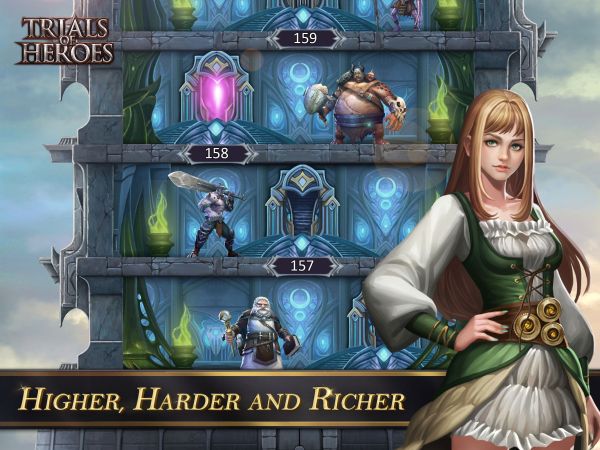 Know what the strengths of your heroes are
Even though the general rule of thumb is that higher star heroes are better than lower star ones, you will still have to do some sorting out because you can only take 6 heroes to battle at any given time.

This means that you should strategize a bit when it comes to choosing the right types of heroes to pair up and send in battle. For starters, you will need two tank types to put up front and take up as much damage as possible, keeping the ones at the back safe.

At the back, you should bring your massive damage dealers, although it’s really useful to have at least 1 (although 2 is not overkill either) support/control type of units.

And when the number of stars and specializations are the same and even the general stats are pretty much the same, look at the skills of the heroes as these are what makes the difference. And look at them planning for the future too, checking out the second and third skill as well: a hero whose initial skill is not that great might become a better choice in the long run once all the three skills are unlocked, compared with one that starts out strong but has worse skills to unlock.

Refresh the marketplace when you’re done with it
A nice thing about Trials of Heroes is the way the marketplace works: it gives you a set of items that you can purchase for regular currency or premium Diamonds, but doesn’t change them until you tell it to. This means that if you see an item you really want, you can keep it there until you have the resources to get it.

However, don’t get too greedy and wait too long for the premium items to become affordable: you might end up getting some sweet deals for regular coins if you keep refreshing the store!

Add friends and help them (help you)
A really easy way for you to unlock more heroes in the game is to add a bunch of friends who are active and send you hearts. So make sure you max out your friends list ASAP and constantly trim off the dead weight, keeping those who are active and send you hearts regularly. Just make sure you return the favor often, otherwise you will be removed from their lists!

These would be out Trials of Heroes tips and tricks, at least for the moment. If you have additional tips to share with us, don’t hesitate to do so by commenting below.